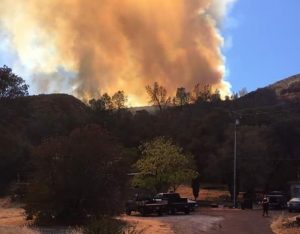 The year 2020 had many terrible fires and COVID-19, for Mother Lode it was also a year for wildlife sightings, gardening, astronomy, and more.

The three most-read news stories on myMotherLode.com in 2020 were related to what became the 2,800-acre Moc Fire which ignited on August 20. It threatened Hetch Hetchy infrastructure and spurred widespread evacuation orders in Groveland and Pine Mountain Lake. President Donald Trump approved FEMA funding for Tuolumne County in October for the Moc Fire in a federal disaster declaration which also covered other large fires in the state. An overview of how close the fire came to becoming even more destructive and the work that went into preventing a catastrophe were detailed here.

In January of 2020, the biggest news was who was going to fill the Orchard Supply Store and Cost-U-Less area in the Sonora Plaza Shopping Center. For most of the year, the shopping center facade has been under construction. As announced back in January the space will be filled by Wilco, a farmer-owned farm supply company based in Oregon. Current signs on the building state they plan to open in the spring of 2021.

As usual, January brought winter snow, but also the Mother Lode was very shocked by a story of five Mountain Lions seen together in Pioneer. California Department of Fish and Wildlife spokesperson Ken Paglia said “Our biologists were surprised to see this many mountain lions in one location — five mountain lions together is pretty unusual –at least when it comes to being photographed.” The full news story’s details are here.

In February a deadly airplane crash near the Columbia Airport took the lives of two business owners from Sonora. The pilot, 73-year-old Robert Clough, and his passenger 71-year-old Robert Parriott. The National Transportation Safety Board (NTSB) has not released a full report about the incident yet.

March was when COVID-19 restrictions began, on March 13 the state announced guidelines for large gatherings to be postponed or modified. The county’s eleven school districts, serving more than 6,000 students combined, announced all public schools in Tuolumne county were to close Monday, March 16. They said the shutdown would provide time for planning for a possible long term shut down as detailed here.

On April 14 news of plans for a peaceful protest over COVID-19 restrictions on Washington Street was a very popular news story. The follow-up news story with photos of the protest is here.

On May 26 Tuolumne Sheriff’s Deputies responded to a domestic violence incident where 56-year-old Richard Councilman of Jamestown refused to leave a Preston Lane Apartment. When the suspect later came out, he produced what appeared to be a firearm, and was shot multiple times. It was later determined that he had a replica gun.

At the beginning of June, in support of Black Lives Matter, a protest was planned in Sonora. The protest likely involved over a thousand people. Protesters filled Courthouse Park and kneeling for 8 minutes and 46 seconds to remember George Floyd. Counter-protesters and other observers of the situation including police and sheriff from other jurisdictions surrounded the park. The protest continued for nearly four hours when law enforcement officials stepped in to ask both sides to conclude the protest peacefully. Several videos of the event were widely shared and are in our news story here. The large crowd prompted city leaders to impose an overnight curfew and proclaim a Local State of Emergency, as detailed here.

The first large fire of the season began on June 16. The Walker Fire Near New Hogan Lake In Calaveras County grew to 1,455 acres and evacuations were ordered as detailed here.

While none of 2020’s protests were linked to outbreaks of COVID-19 on June 28 an event at the River Ranch Campground prompted Tuolumne County health officials to publicly notify anyone who stayed there between June 22 and June 28 to self-quarantine.

In July news broke that the Calaveras Grand Jury issued an indictment accusing 74-year-old Michael Ray Dell’Orto of Mokelumne Hill of felony involuntary manslaughter. The charge was in connection to the Maria Fire which killed David Rios in July 2017. A Jury Trial is scheduled in April 2021.

The most popular positive news of the year was about Comet Neowise. On July 16 beautiful photos were released from near New Melones as the rare comet came closer and the dark clear skies of the Mother Lode provided perfect conditions. Photographer Jim Cruff’s photos as well as many others were sent to us allowing myMotherLode to create a gallery dedicated to astronomy here.

On July 13 the state shutdown more businesses due to a surge of COVID-19 cases as detailed here.  Tuolumne County Public Health reiterated Governor Gavin Newsom’s direction, that closing indoor operations of restaurants along with indoor and outdoor operations of bars was necessary.

July was the month for fires including on July 20 the Quarter Fire burning in the Stanislaus River Canyon near Cedar Ridge which burned 15 acres. On July 29 the Phoenix Fire in Standard near the Mill caused great alarm as the smoke could be seen by many locals who sent us photos. On July 31 the O’Reilly Fire in downtown Angels Camp closed a section of Highway 49 and Main Street from Mark Twain Road to Utica Park as detailed here.

On August 7, a welcome break from the news of fires, news about the Perseid meteor shower viewable at its peaking in mid-August was a very popular news story.

August 18 was the 1,500 acre Salt Fire near the Salt Springs Reservoir the following day Calfire crews contained the 55 acres Flint Fire near Milton in Calaveras County. As mentioned the Moc Fire began on August 20 but on August 24 there were many more lightning-caused fires. The Blue Jay fire which was started by lightning on July 24 has grown to 6,992 acres and the Wolf Fire which is 2,057 acres. Both have been allowed to burn in Yosemite.

On September 7 the fire risk was still very high and the decision was made to close Pinecrest Lake, forest campgrounds, and other day-use areas in the Stanislaus National Forest. Also to prevent fires myMotherLode.com handled many views from visitors during each of the announcements of PG&E’s possible power shut-offs on September 7, October 24, and December 4.

Drift Smoke over the Mother Lode area also caused alarm, some was caused by the Loyalton fire in the Tahoe National Forest, which grew to 47,029 acres and started August 14. The Creek Fire accounted for much of the drift smoke, it currently stands at 379,895 acres and 96% contained with eight personnel monitoring the burned area likely through the end of 2020. In September Yosemite prepared for the potential of the Creek Fire reaching the park.

On September 17 the death of 17-year-old Eric Aguiar and the arrest of alleged shooter 20-year-old Joshua Rodriguez in Utah shocked the community. The celebration of life for Aguiar was detailed here. Rodriguez recently plead not guilty.

In October security video footage from a home in a very residential area of East Sonora revealed a large mountain lion as covered here.

The elections were covered on myMotherLode both in March and November. The November election story became a top news story of 2020. The election results are posted here.

On November 6 Tuolumne Public Health warned COVID-19 was surging. They stated, “Several of our county’s recent case clusters include those associated with Halloween gatherings at households, as well as at several bars in the Sonora area. People who participate in gatherings, whether at a private home or otherwise, should get tested 5 days after potential exposure. We have also learned that several individuals who had been identified as close contacts and were given instructions to quarantine, did not do so, which has resulted in subsequent new positive cases. It is vital that individuals adhere to isolation and quarantine instructions to prevent exposing others to the virus and further spreading the disease in our community.” At that time there were 45 active cases and 8 deaths. Tuolumne County skipped from the orange tier to the highest purple tier restrictions while Calaveras moved from the least restrictive yellow tier to orange on November 16. More COVID-19 restrictions became the current Stay at Home Order. In Tuolumne County, 20 total deaths and 350 active cases were reported December 21. An outbreak at the Sierra Conservation Center currently involves 871 or 40.7% of the 2,138 inmates. SCC also oversees Conservation Camps throughout Central and Southern California. Between the 16 Conservation Camps, there are about 820 inmates.

Although official plans were canceled for the Christmas Parade after Thanksgiving our news story here includes photos of decorated vehicles on Washington Street.

On December 5 an escaped control burn in Sonora was named the Uplands Fire, although it was just 1/8 of an acre the smoke and aircraft in the area was alarming to locals who sent us many photos of the smoke.

On December 22 the City of Sonora reviewed whether it would fine the Sportsman bar for a Celebration of Life held on December 12. The council decided to issue a warning as detailed here.

November and December brought winter storms and snow to the High Sierra and the passes were closed for the season on December 15. Both Dodge Ridge and Bear Valley have been able to open.