Skywatchers Prepare To Peep The Perseids At Their Peak 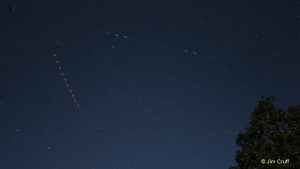 Viewable beginning in mid-July, they peak in mid-August. You can enjoy them this weekend, in fact. NASA scientists share that this year’s shower will probably produce its greatest number of meteors in the shortest amount of time during the early mornings between Tuesday-Thursday this coming week.

Since they occur each year during warmer summer nighttime weather, conditions that are more comfortable for skywatchers, the Perseids tend to be one of the most popular celestial events of the year. As for their “light show” attributes, clocking in with a velocity of about 37 miles per second, the Perseids are very fast; they are also bright and known for their larger explosions of light and color – aka fireballs. Adding to their popularity, the Perseids are one of the most prolific showers since you can see about 50 to 100 meteors per hour, even more under optimal conditions.

From the Northern Hemisphere, the Perseids can be spied in the sky to the north during the pre-dawn hours although meteors from this year’s shower may be viewable as early as 10 p.m.

Since this year’s peak shower period is occurring during the phase of the last-quarter moon, astronomers recommend going to the darkest possible location and lean back so you can view as much of the sky as you can directly above you. They also advise would-be shower-gazers to get comfortable, take the time to let your eyes adjust to the night sky for about 30 minutes and be patient: the longer you are out there in watch-mode, the more you will see.

Local photographer and sky-watcher Jim Cruff shares he will be seeking dark skies over the weekend into the midweek to capture this year’s event. He shares a photo of the 2019 Perseids taken last year on Aug. 13 that you can view in the image box. The red dotted line is a passing aircraft caught while the shutter remained open.

You are welcome to share your Perseids photos by sending them to news@clarkebroadcasting.com.