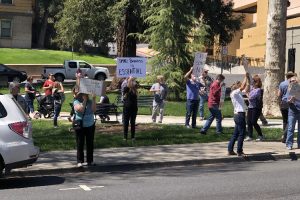 Sonora, CA – There was plenty of honking in show of support of the nearly 100 protestors that lined Courthouse Park in Sonora during the noon hour along Washington Street, as can be viewed in the image box video.

We reported earlier that many business leaders are concerned about Constitutional rights during the coronavirus pandemic, and smaller businesses being forced to close, while larger big box stores like Walmart can remain open. Still working on signs, one of the protestors,  Amber Allen relayed, “I think people are ready to go back to work and not let this economy slide further.”

The protest was peaceful, but at one-point Sonora Police Chief Turu Vanderwiel voiced concerns to one of the main organizers, Cindy Zelinsky, about the need for improved social distancing among the group. Click here to view a video of the exchange.

Regarding concerns about staging the event, Chief VanderWiel commented, “I got lots of calls, the sheriff’s departments got a lot of calls, the health department, and city hall also with people generally concerned about the health of family members. They really wanted us to do something about this.” He went on to disclose, “I also understand this group’s right to demonstrate. They have a point to make and I get it,” but he added, “I don’t think now is the best time to do that. I think this message could be delivered after the order [stay at home] is lifted in a little safer manner.”

After the chief’s talk with Zelinsky, the protestors did move farther apart and some began walking up and down Washington Street several feet apart as well.