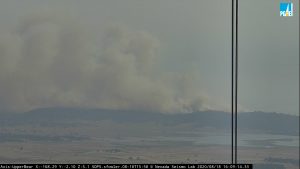 Update at 5:52pm: CAL Fire spokesperson Lindy Shoff says the latest size estimate on the Salt Fire is 1,500 acres. It has been spreading at a fairly rapid rate over the past couple of hours, but thankfully no structures are considered threatened as it is in a remote area near the Salt Springs Reservoir. The fire has been moving in a southeast direction. Fire crews will be on scene for an extended period.

Update at 5:30pm: CAL Fire reports that the latest size estimate on the Salt Fire remains 200 acres. Officials are continuing to aggressively fight the blaze near the Salt Springs Reservoir in the Milton area. No structures are considered threatened. Click here to view a webcam aimed near the fire.

Update at 4:32 p.m.: CAL Fire officials report a jump in the size of the Salt Fire, burning near Salt Springs Reservoir. At 4:30 p.m. they sized the blaze at 200 acres, adding that units are aggressively battling the flames.

Update at 3:57 p.m.: The Salt Fire in Milton neat Salt Springs Reservoir is now reported as being at 40 acres in size.

It is located in a sparsely populated grassland area with few structures.

It broke out shortly before 3 p.m. and was dubbed the Salt Incident. It is near Milton, off Hunt Road from Highway 4 Copperopolis, not far from the county’s Rock Creek landfill. CAL Fire officials report it as 20 to 30 acres in size, moving with a moderate rate of spread, adding there are no structure threats.

We will provide more information as it becomes available.