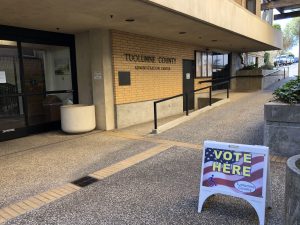 Update at 10:44pm: While there are still 3,000-5,000 provisional and late-arriving ballots to count over the coming days, it appears likely that Tuolumne County will have two new additional board of supervisors in 2021. With a total of 27,211 ballots tabulated on Election Night, David Goldemberg and Jaron Brandon have big leads in the District One and Five races. In the TUD race, David Boatright, Barbara Balen and Lisa Murphy are the leaders. Congressman Tom McClintock has a narrow lead over challenger Brynne Kennedy. You can find the latest results by clicking here.

Update at 8pm: The vote centers closed at 8pm across California, and we’ll be posting the latest updates as they come into the news center. Click here for the latest results, and make sure to refresh the page throughout the night.

Original story posted at 11am: Sonora, CA — Vote centers were busy in Tuolumne County during the first couple of hours of being open on this Election Day.

Tuolumne County Clerk and Auditor-Controller Debi Bautista says around 160 people stopped by one of the four vote centers during the first two hours this morning. In addition, around 50 people stopped by the Main Election’s Office to cast a mail ballot.

As of late yesterday, 24,000 ballots had already been cast in Tuolumne County, equaling a 68-percent voter turnout. That number already well surpassed the roughly 21,000 ballots cast during the March primary election. The last Presidential Election, in 2016, saw 26,000 voters, and Bautista is optimistic that 2020 will be higher.

Nationally, there are races for President, Senate and House of Representatives. In addition, there many highly competitive local races as well, for board of supervisor seats, TUD, special districts, school boards and tax measures.

Tune in for twice hourly local election updates after the polls close at 8pm on AM 1450 and FM 102.7 KVML, Star 92.7 and 93.5 KKBN. The results will also be posted on the myMotherLode.com Election Page. Live national coverage on KVML starts at 5pm.