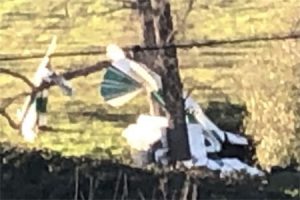 Plane crash site in Columbia off Springfield Road near the airport

Update at 7:30 p.m.:  This evening National Transportation Safety Board (NTSB) officials released more details to Clarke Broadcasting on the deadly plane crash near the Columbia Airport.

One of the investigators scouring the crash site for clues, Tealeye Cornejo, gave this description of how the Cessna 140A plane went down just an eighth of a mile from Columbia Airport, “It looks like it hit some trees. It did come to rest inverted [upside down], so we will be piecing all of that together in the days to come.”

The men were returning from a business trip, according to Cornejo, but she did not know from where because Columbia airport is a non-towered airport. The older two-seater plane crash-landed in a field near a pond in the 21000 block of Springfield Road, as reported here last night.

While the NTSB did its onsite exam of the airplane today, Cornejo says on Friday the plane will be removed and taken to Sacramento. She adds, “Once it gets there, we’ll lay it out and go through the aircraft again since we have all four corners of the plane.” That is when she says inspectors will “establish flight control continuity as well as take a look at the engine to make sure that there weren’t any issues with the engine.”

Hear Cornejo’s entire interview with further details on the crash and the plane by clicking on the video in the image box.

Update at 1:45 p.m.:  More details have emerged regarding the two victims in yesterday’s plane crash near Columbia Airport. Clarke Broadcasting has confirmed with the store manager of Twain Harte Market that 71-year-old Robert Parriott was the owner of that business, but the manager was not authorized to make any other statements. Additionally, the other victim, 73-year-old Robert Clough, also ran his own business, Bob Clough Refrigeration, and was a plumber. Clough moved to Sonora in the early ’90s and was an experienced pilot that had flown at night often, according to a family friend, who wanted to remain anonymous. Both men were well known in the community.

Regarding the investigation into the crash, Tuolumne County Sheriff’s spokesperson Nicco Sandelin updated, “Part of the NTSB-FAA investigation, in terms of whether or not they [Clough and Parriott] were supposed to be taking off or landing at the Columbia Airport, what was scheduled…and a flight itinerary — that will all be part of their investigation.”

Further details on the crash and cause of death written by News Director B.J. Hansen can be viewed below.

Original post at noon: Columbia, CA — The Tuolumne County Sheriff’s Office has released the names of the two victims in yesterday’s tragic plane crash in Columbia.

He adds, “The preliminary cause of death is major trauma; however, the final cause is pending autopsy. The cause of the crash along with the circumstances are being investigated by the NTSB. We are saddened by this tragic loss and want to extend our condolences to their family and friends.”

Click here to view an earlier story. The crash happened at around 6pm on Wednesday in the 21000 block of Springfield Road.