Rare Comet Prepares For Its Close Up Over The Mother Lode 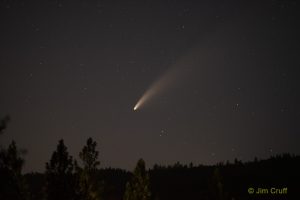 Sonora, CA – The brightest comet many of us have seen in the past quarter-century is preparing for its closeup over the Mother Lode.

Discovered back in March by NASA scientists and named for the infrared telescope they used to find it, NEOWISE, or Comet C/2020 F3 was located over New Melones reservoir this past weekend in the pre-dawn hours by local photographer Jim Cruff.

As reported here, he shared some photos with Clarke Broadcasting. Cruff additionally recounts, “When I parked the car at the New Melones bridge, the comet was so bright that I could see it through my windshield.” He adds, “As I stepped out of the car into the surrounding darkness, the comet popped out at me — I held my breath as I took in the rare sight. Being an amateur astronomer, I have seen several comets and comet NEOWISE ranks as one of the best that I have seen.”

Comets this bright that can be viewed with the naked eye are extremely rare, so NEOWISE is getting plenty of notice and rave reviews from sky gazers all around the world. Once this beauty passes, if it does not disintegrate in the meantime, the comet is not expected to make a return performance for another 6,800-plus years. The Northern Hemisphere has not been able to view a stand-out comet since Hale-Bopp, which was watched the world over for some 18 months over 1996-97.

How To Find NEOWISE As It Peaks This Weekend

Fortunately for those who are not early risers, NEOWISE has now shifted to evening mode where it can be seen rising higher in the night sky as it heads toward the “bowl” of the Big Dipper. Expected to peak sometime between now and the end of the weekend, it will come closest to Earth next Wednesday.

Although comets can fizzle and disappear at any time, barring that, scientists expect NEOWISE to gradually diminish from view in late July. After that, it should still be visible for those with access to a small telescope until it disappears into the outer solar system by mid-August.

Last night Cruff pulled his camera out again and captured NEOWISE from a deck over Phoenix Lake Road. “I was able to view the comet without binoculars…to view with the naked eye, people will have to get away from city lights,” he advises. You can view his photo in the image box. He advises folks to find a clear view of the northwest and bring binoculars if you have them. Cruff also shares a video you can view from the image box link.

Cruff says he rates this particular celestial event “near the top” among those he has been able to locally view over the years, adding that in the fairly dark skies above the Mother Lode, he is able to regularly photograph satellites, the Milky Way and other galaxies as well as meteors and planets.

Local resident Michelle Bentz, who shares she took her first astrophotography images Wednesday night up past Strawberry, between 10 p.m. and midnight, also captured some nice images of NEOWISE that she graciously agreed we could add to the image box slideshow for this article.

According to Popkins, “The best way to view the comet now is during the evening, about an hour after sunset, looking towards the northwestern horizon. I personally saw it myself last night around 10 p.m. without binoculars. It’s located below the Big Dipper. Look about another Big Dipper’s length below it, and you should see it off to the right a little. I believe we will be able to see it for another week, but viewing it sooner rather than later is best as it won’t be as visible the closer it gets to Earth.” Popkins adds that during “normal” times she conducts a few astronomy interpretive programs every summer.

Barbour offers, “We can see Neowise from our deck in Columbia, looking northwest toward Angels Camp. It’s about three fists below the basket of the Big Dipper. If you hold out your arm and make a fist just under the stars that form the righthand side of the basket, drop down two more fists and there it is! It’s visible with the naked eye around 9:30 but for us, it disappears in the treetops at the horizon by 10 p.m. or so. This is great timing to see it because the moon is on the wane and doesn’t interfere with the dark sky. Beer Can Corner at the top of Yankee Hill Road would be a nice spot to view it, for sure.”