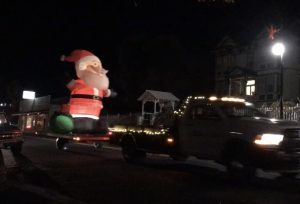 We reported just over a week ago that City of Sonora officials formally nixed plans for the 2020 city-sponsored parade due to the county moving to the purple COVID-19 tier. The city had earlier been planning to scale back the parade and allow a “drive-by” event with limited vehicles traveling through various city streets, but that idea was eliminated out of concern that people would congregate in groups along the route.

Upset by the cancelation, in the form of a protest, dozens of people driving lighted vehicles, and some floats, gathered shortly before six o’clock last night in parking lots at the end of South Washington Street, and one by one, started heading downtown. You can click on the video box to see some of the “unofficial” parade entries. They waived and honked to the many who were downtown shopping and eating.

The Historic Downtown Sonora Christmas Parade is traditionally held on the Friday after Thanksgiving.

Of note, downtown Sonora was decorated for the holidays last week with the traditional wreaths placed in various locations, but due to the COVID-19 pandemic, there will be no activities at Courthouse Park, like visits with Santa.