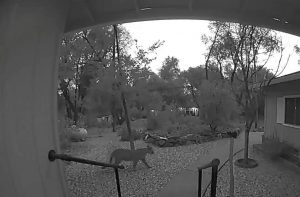 East Sonora, CA – An East Sonora woman got a big surprise when she got around to watching the video sent to her in a notice from her Ring home security camera system – she vows never to do that again.

It was just before 7 a.m. on Friday (Oct.16th) when Shanna Relei got the security notice of something moving past her home’s front door. Noting that she gets notices frequently for feral cats walking by, she recalls, “It was quite frightening because I saw the notification but didn’t open it until after I had gone outside and walked the dogs, just minutes later. Then when I got back in, I checked it and was surprised to see that it was a mountain lion that we had missed.”

Relei lives in the nearly hundred home Hillsdale Neighborhood behind the Sears Home Store in the Mono Village Shopping Center on Mono Way. She says she did not see anything on her walk nor did her two 60-pound dogs alert to any danger, making the video even more shocking as she had missed the big cat by just minutes.

“I had to watch it three times for it to really hit me that it was a mountain lion. There is just no way that a mountain lion would be here, but sure enough.”

Relei reported the sighting to California Fish and Wildlife Tuolumne County representative, citing, “We were concerned just for our animals and the other people’s animals in the neighborhood because we live in a pretty residential area, so that was pretty concerning to see and I know people have young children.”

The representative told her exactly what to watch out for and report back.

“They definitely want to know if there’s any future sightings and most certainly if there’s any injured wildlife or animals in the area, especially if you think it’s from a mountain lion.”

Now that she thinks about it, Relei says, recently several neighbors’ pets have gone missing along with some feral cats in the neighborhood. Relei says she never put the two together — until now. One thing she will make sure to do in the future, “I don’t think I am going to discount any ring notification from now on.”

Click here for California Fish and Wildlife safety tips when spotting a cougar.