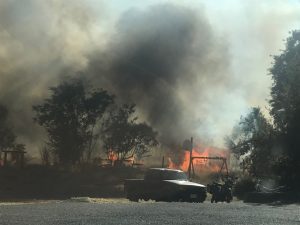 The CHP relays that the section of Highway 49/S. Main Street from Mark Twain Road to Utica Park has reopened to traffic. CAL Fire details that all Columbia aircraft have been released from the scene and ground crews will continue to work towards full containment and mopping up late into the night. What sparked the blaze is under investigation.

Update at 6:55 p.m.: CAL Fire dispatch reports that firefighters have stopped the forward rate of spread on the five-acre O’Reilly Fire burning in downtown Angels Camp. Columbia air tankers have been released but Air-Attack remains in the skies overhead. Crews will continue to work toward full containment and mopping up into the night.

Evacuations remain in place for a cluster of homes in the vicinity of Utica Park, including Stanislaus and Mark Twain streets. Residents are expected to be allowed back into their homes shortly. Also, Highway 49/Main Street is blocked between Utica Park and O’Reilly’s store to allow for emergency fire traffic. Further details on the fire are below.

Update at 6:25 p.m.: CAL Fire officials say the O’Reilly Fire, behind O’Reilly Auto Parts, is holding steady at five acres and crews are working to mitigate the threat to nearby structures.

Officials add that air tankers are on a load and hold at Columbia Air Base, which is considered a promising note. Fixed-wing aircraft are among the units working the incident in a Unified Command with Angels Camp Fire Department

It was earlier thought that there was at least one other fire going on involving a structure. Officials say there are no structures on fire and that heavy smoke in the very condensed downtown area, possibly pushing into the homes, led to at least two reports of other fires. These were determined to be unfounded.

According to Calaveras County Sheriff’s spokesperson Sgt. Greg Stark,  deputies, and Angels Camp Police officers were evacuating the cluster of homes in the vicinity of Utica Park, including Stanislaus Avenue and Mark Twain Road. He adds that persons without official business are encouraged to stay away. highway 49/Main Street is blocked between Utica Park and O’Reilly’s to allow for emergency fire traffic.

Update at 5:45 p.m.: Columbia aircraft have been called to the fire being dubbed the “O’Reilly Incident” and possibly at least one other fire.

The O’Reilly Incident involves a grass fire ignited behind the O’Reilly Auto Parts store, between Highway 49 and Mark Twain Road. CAL Fire dispatch reports the grass fire is five acres in size and the flames have spread to a home. They add that several structures are threatened.

The CHP has closed South Main Street/Highway 49 at the Mark Twain intersection. There are evacuations in the area and CAL Fire dispatch says if anyone in the area feels threatened in their homes or business to leave immediately. They also ask the public to stay out of the downtown Angels Camp area.

Original post at 5:15 p.m.: Angels Camp, CA — CAL Fire ground crews are battling a grass fire in Angels Camp, off South Main Street/Highway 49. The flames broke out behind the O’Reilly Auto Parts store, between Highway 49 and Mark Twain Road. CAL Fire dispatch relays the flames are moving at a “heavy spread” and that structures are threatened. An update will be provided as soon as new information comes into the newsroom.