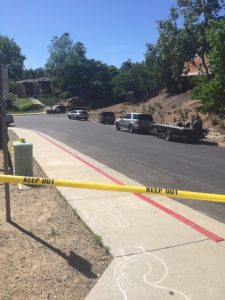 Jamestown, CA — The Tuolumne County Sheriff’s Office has identified the man who was killed in a shooting incident on Preston Lane earlier this week.

It happened just after 1pm on Tuesday at the Preston Lane Apartments in Jamestown.

The Sheriff’s Office reported that deputies responded to a domestic violence incident, and the suspect refused to leave, and threatened to “shoot it out” with law enforcement.

The suspect came out and produced what appeared to be a firearm, and was shot multiple times. It was later determined that he had a replica gun.

The man has now been identified as 56-year-old Richard Councilman of Jamestown.