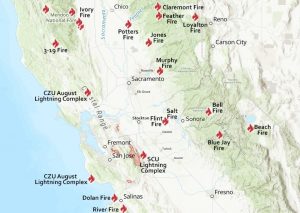 Update at 7:15 p.m.:  CAL Fire reports that crews have contained the Flint Fire that was burning near Milton in Calaveras County. The final size of the blaze is 55 acres. What ignited the fire remains under investigation.

Update at 4:50 p.m.:  The Flint Fire’s forward rate of spread has been stopped.  CAL Fire spokesperson Lindy Shoff relays that there was a miscommunication between fire officials on the ground and dispatch that reported the fire had grown to 150 acres, that is not accurate and the fire remains about 50 acres in size. The flames broke out in grass in the 11400 block of Rock Creek Road east of Coyote Ridge and Milton roads in the Milton area of Calaveras County. It is burning east of the 1,500 acres Salt Fire that ignited yesterday afternoon, but the two fires are not related. All aircraft have been called off the scene. A small crew will remain to achieve full containment and mop up for the next couple of hours.

Update at 4:30 p.m.: The Flint Fire has grown from 50 to 150 acres, but CAL Fire officials say it is holding. The blaze is burning in the vicinity of the Salt Springs Reservoir, east of the 1,500 acres Salt Fire that broke out yesterday afternoon. CAL Fire officials relay that additional incoming resources have been canceled as crews have made great progress on the flames. Helicopter 404 and a Tanker 83 out of Columbia are assisting in battling the fire, which is burning in grass in the 11400 block of Rock Creek Road east of Coyote Ridge and Milton roads.

Update at 3:55 p.m.: Another blaze that broke out in the vicinity of the Salt Springs Reservoir is now 50 acres in size moving with a dangerous rate of spread.

CAL Fire officials say the incident has been dubbed the Flint Fire. No word yet as to whether there are any structures threatened although it is confirmed as unrelated to the Salt Fire, which is east.

Original Post at 3:47 p.m.: Milton, CA — Ground crews and Helicopter 404 and a Tanker 83 out of Columbia are heading to a vegetation fire in the Milton area of Calaveras County near the Salt Fire.

The flames broke out in some grass in the 11400 block of Rock Creek Road east of Coyote Ridge and Milton roads. CAL Fire reports the fire is estimated at an acre in size and moving at a moderate rate of spread. It is unclear if this is a spot fire sparked from the 1,500 acre Salt Fire that ignited yesterday afternoon in the area of the Salt Spring Valley Reservoir. An update will be provided as soon as new information comes into the newsroom.