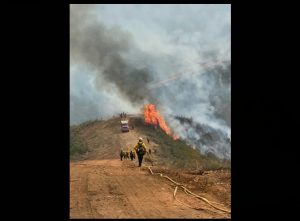 It was brought up for discussion during today’s board of supervisors meeting. When the fire ignited on August 20 there was a dire concern about the ability to get needed resources, as lightning-caused fires were raging across the state.

Newsom stated, “It could have impacted the entire Hetch Hetchy system, which is the 167-mile gravity-fed system that actually feeds the water and a lot of power for the city of San Francisco, and the region. There was real concern around this fire.”

Newsom added, “In politics broadly defined, unlike baseball, you don’t get credit for saves. Let’s hope that these firefighters get some credit for what they were able to produce at this fire.”

This morning, Supervisor John Gray, who represents the south county region, stated, “When you look at where the proximity was to the Hetch Hetchy system, the Governor is completely right. It could have been devastating. It could have been billions of dollars in damage if things went awry.”

Praising the effort, Gray also posed the question, “Boy, haven’t we come a long way since the Rim Fire?”

District Five Supervisor Karl Rodefer added,  “For people who may not know, there is a drainage that if that fire had passed Priest Coulterville Road and had gotten into that drainage, it would have gone straight up the hill to both Big Oak Flat and Groveland, and probably would have taken both of those communities out before we could have gotten it stopped.”

That scenario early on was the big concern when state resources were tight.

“The nice thing about having the relationship that we do with CAL Fire is that they have direct connections to the state, and we did get additional resources,” says Rodefer.

Board chair Sherri Brennan also noted the work done by the county’s local fire task force, created over a year ago, and other related actions.

There were many other stories shared at the meeting. For example, Madeline Amlin, a GIS Analyst, set up a map detailing road closures and evacuation zones. She also earlier helped put together a GIS coordination group which had met to discuss mapping needs in the county. Seven of those members assisted CAL Fire during the Moc Fire.

When Sheriff Pooley called for evacuations, the plan was implemented over the course of about 18 hours. Buses were made available from the Tuolumne County Transportation Council.  Southside Senior Services and Area 12 Agency on Aging took lists to the sheriff’s office of people who couldn’t drive or would need assistance. Deputies drove to their homes to get people out and took them to a spot in Moccasin so that they could be bused to an evacuation zone.

OES Coordinator Liz Peterson noted that the IT staff immediately jumped into the action on day one to create an EOC, Tribal Leaders were on scene to help, the Red Cross provided emergency structures, animal control staff worked 250 hours and Sonora High School called to offer buses for evacuees.

CAL Fire Unit Chief Nick Caspi wrapped it up by stating, “What the county staff did, what the sheriff’s department did, the evacuations they conducted, proves that our county is ready to handle these situations should they arise, and it is a team effort. But more then that, those people who are on the line, they can’t do it without the community support, and that’s the motivation that keeps them going.”

Led by Supervisor Brennan, the board gave a standing ovation to everyone involved in the Moc Fire fight.