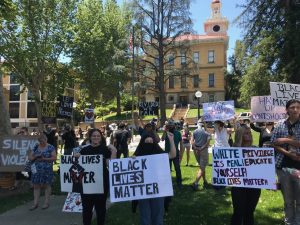 Update 4:45pm by BJ Hansen: After a Black Lives Matter protest continued for nearly four hours, with no end in sight, law enforcement officials stepped in to make a plea.

Although it stayed relatively peaceful, things were occasionally escalating between the two sides (protesters and counter-protesters), and additional law enforcement from neighboring counties, like Stanislaus County, responded to the park. Deputies from Calaveras County had also earlier arrived.

Tuolumne County Sherrif Bill Pooley and Sonora Police Chief Turu Vanderwiel rounded up the anti-protesters for a quick meeting at around 4:25pm and encouraged them to begin dispersing, and right after, went over and made the same plea to the Black Lives Matter protesters.

A protester then called for solidarity, and to respect the law enforcement officials, and he then encouraged Pooley and VanderWiel to take a knee with the group. The two did so, and then most of the protesters picked up signs and left the park, to cheers.

There are still a few dozen protesters still hanging around Courthouse Park, but earlier in the day there were nearly a thousand. That said, the City of Sonora has called for a special meeting at this five o’clock hour to potentially implement a curfew related to the remaining protesters.

Click on the video with Sherrif Pooley and Chief Vanderwiel here.

We’ll add additional video throughout the night, which you can find on the myMotherLode.com youtube page.

Update at 3pm: Hundreds continue to protest at a Black Lives Matter protest in downtown Sonora.

Click here to view video of the nine-minute moment of silence in honor of George Floyd.

During the silence, the pledge of allegiance was recited by people across the street, and you can view the video by clicking here.

Click here to view the protesters chanting “Black Lives Matter,” and click here for chants of “I can’t breathe.”

Update at 1:23pm: A passionate Black Lives Matter protest got underway at 1pm in downtown Sonora in response to the killing of George Floyd in Minnesota. Protesters are packed into courthouse park, and counter protesters are across the street, and along the side streets. Click on the video box to view chanting of “Justice for All” at the start of the protest.

Click here to also view a video of an early interaction with the protesters, and a counter-protester.

There was also a nine-minute moment of silence, in which counter-protesters recited the pledge of allegiance.

Original story posted at 12:45pm: Sonora, CA — Ahead of a demonstration in solidarity with the Black Lives Matter movement set to begin at 1 p.m. Sheriff Pooley has released a statement.

He says, “We have been in close contact and observing the protest in Oakdale this morning. It’s reported there were several hundred people in attendance today. It has also been reported that all involved have been peaceful during the event. This provides light to our event as we look forward to a peaceful gathering and the ability to reflect and grow together. We will continue to keep everyone updated on the event as it unfolds.”

Clarke Broadcasting has reporters BJ Hansen and Tracey Petersen on the scene to cover the event as it unfolds.

The stated mission of the global Black Lives Matter Foundation, created in support of the 2013 movement formed in response to the acquittal of Trayvon Martin’s murderer, is to eradicate white supremacy and build local power to intervene in violence inflicted on black communities by the state and vigilantes.

Local student Morgan Wilkie, a 2018 Summerville High graduate double-majoring in history and geography with minors in Spanish and ethnic studies at Cal Poly San Luis Obispo is spearheading the demonstration while home during the COVID-19 pandemic. Clarke Broadcasting interviewed her Tuesday, as reported here, about the event. She says it is intended to help change an ingrained racially biased narrative.

“We [as white people] are very privileged to not have to walk down the street and being endangered just because of the color of our skin — and I think that is not something that is widely recognized and that is another aspect,” she explained. While all lives matter, she stated, “I am privileged enough to be able to organize a protest to use a voice for those whose voices have been taken from them.”