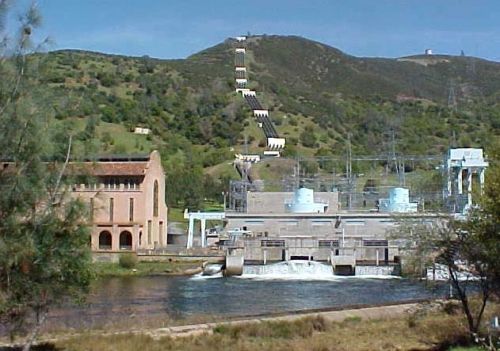 A company town, Moccasin is entirely owned by the City and County of San Francisco. Homes are for employees who work for the city or state. There are no stores or even a gas station, the most striking feature of Moccasin is its massive water pipes. The water pipes bring water from the reservoir behind the O’Shaughnessy Dam within Yosemite National Park over and down Priest Grade and power the turbines at Moccasin. Completed in 2004, the pipeline was designed to bypass Priest Reservoir in the event of water quality concerns, such as high turbidity from hillside runoff, bank erosion or forest fires.

East of town, State Route 120 will take you up the hill to Yosemite. Our Map of Moccasin. The section of Highway 120 just beyond Moccasin, or “New Priest Grade,” climbs from about 910 feet to 2,450 feet over a distance of six miles. Old Priest Grade, the original route, is a narrower road and covers the same change in elevation over about 2.7 miles. It is common to see vehicles with smoking brakes descending the old grade.

The California Department of Fish and Wildlife operates the Moccasin Fish Hatchery. Opened in 1954, it has 36 ponds and an 88-trough hatchery building. On March 22, 2018, the dam was overwhelmed with water and the hatchery was flooded. While San Francisco Public Utilities Commission reported they restored the dam as detailed here, the hatchery remains closed.

Non-native fish like brown trout and brook trout were brought into California waters in the late 1800s and are now widespread. As a result, some native trout are listed under the Endangered Species Act. Coastal rainbow trout, have been selectively bred, cultured at hatcheries, and stocked throughout the state. New populations of native trout have been established in some waters as part of restoration and recovery efforts.

Moccasin is located near Don Pedro Lake with its many campgrounds, water sports and fishing. You can even rent a houseboat to take in the lake at your leisure.

Moccasin is part of the Hetch-Hetchy reservoir. San Francisco received congressional approval in 1914 for the water project with Groveland as the construction headquarters. Not without opposition, those who want the Yosemite Valley restored can be found at hetchhetchy.org.

The regional water system provides water to 2.4 million people in San Francisco, Santa Clara, Alameda and San Mateo counties. The Bay Area Water Supply and Conservation Agency (BAWSCA) supplies 1.8 million of those citizens in the cities of Burlingame, Hayward, Menlo Park, Palo Alto, Redwood City and San Mateo, along with the Alameda County Water District, were among Bay Area communities whose support was influential in persuading Congress to pass the controversial Act, and President Woodrow Wilson to sign it.

Eighty-five percent of the water comes from Sierra Nevada snowmelt stored in the Hetch Hetchy reservoir situated on the Tuolumne River in Yosemite National Park. Hetch Hetchy water travels 160 miles via gravity from Yosemite to the San Francisco Bay Area. The remaining 15 percent of water comes from runoff in the Alameda and Peninsula watersheds. This local water is captured in reservoirs located in San Mateo and Alameda counties. Delivering approximately 260 million gallons of water per day, the regional system consists of over 280 miles of pipelines, over 60 miles of tunnels, 11 reservoirs, five pump stations and two water treatment plants.

Hetch HetchyConstruction of the regional water system proceeded over the following 20 years, with water first delivered in 1934. Construction on the original Moccasin Powerhouse was started in fall 1921. The facility was completed and began generating power on August 14, 1925. The original powerhouse was removed from operation February 7, 1969.

A Fun Night Out To Make Neighborhoods Safer

A Fun Night Out To Make Neighborhoods Safer