Sitting at the base of the Blue Mountain on Highway 26 at 2,769 feet you will find West Point. Our Map of West Point

A peace pole at the Blue Mountain Coalition for Youth Center was put up marking the five-year anniversary of 9/11 and to call attention to violence in the community. The peace pole is square and made out of cedar. On each side the word peace is written in English, Arabic, Chinese and MiWuk. Click here to read the full news article. 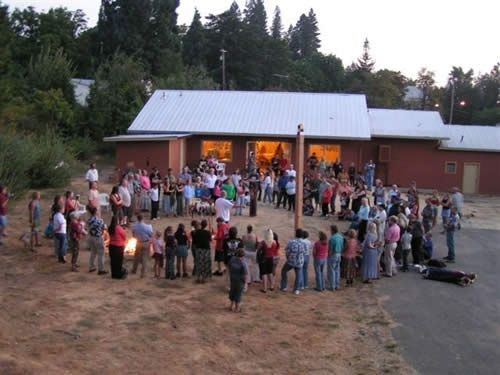 Kit Carson, who was a scout searching for a pass over the Sierra, was stranded here by high flood waters from the Mokelumne River in 1843. As he was able to go no further until the waters receded, he called this his western terminus, West Point. West Point is still a popular dropping off point for those looking for the quiet home town feel of the Foot Hills.

Over the Calaveras Amador county line is the city of Volcano where you will discover Black Chasm Caverns. For more information visit our Caverns and Spelunking in the Mother Lode page in the destination guide.

West Point was a thriving trading post prior to discovery of gold in the area. Bret Harte, famous author, lived here for a time.

California Historical marker number 253, two miles west of West Point states: “This monument was erected to the memory of pioneers of Sandy Gulch, 1849 trading center for miners of northeastern Calaveras County. The settlement, in an area that was home to many Miwok Indians, was named after the gulch where William and Dan Carsner found large nuggets of gold embedded in the coarse sands. Water for mining was brought from the middle fork of the Mokelumne River through Sandy Gulch and Kadish Ditches. Quartz mining began in the early 1850s, and the first custom stamp mill in the district was located at the head of Sandy Gulch…” 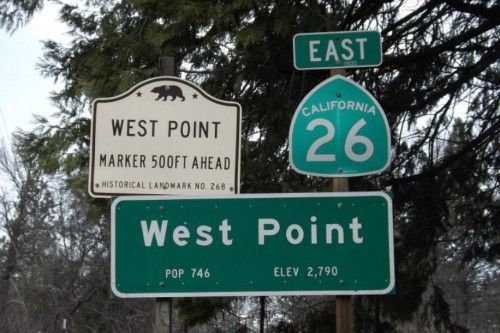