The township of Wilseyville was established in the 1940s, once a part of the historic gold rush site known Sandy Gulch. Visitors will find Wilseyville one of several townships in the area that emanate For those looking for the quiet hometown feel of the Sierra Foothills. Our Map of Wilseyville

The long-standing race called the “Wilseyville Hare Scramble” offers sanctioned races for all ages and skill levels. The event drew approximately 750 riders and many more spectators and vendors in 2022. The event is an example of private organizations offering sustainable long-term recreation events for dirt bikes and minimizing the negative impacts of illegal and unsanctioned trails on public lands. The Calaveras County Sheriff’s Office thanks the public for using public lands in a safe and legal manner with the reminder that Quads, motorcycles, UTV, or snowmobiles all legally require helmets. Law enforcement also reminds everyone to never ride alone, always let someone know where you are going, and never ride anywhere that exceeds your skill level or is not a sanctioned trail.

Beyond Wilseyville and the Calaveras Amador County line is the city historic town of Volcano, noted world-wide for it’s lovely Daffodil Hill, and where you will discover the Black Chasm Caverns. For more information visit ourCaverns and Spelunking in the Mother Lode page in the destination guide.

Wilseyville was named after Lawrence A. Wilsey, an official of American Forest Products, a company based in San Francisco, which is no longer in operation.

California Historical marker number 253, just outside Wilseyville and two miles west of West Point on Highway 26 states: “This monument was erected to the memory of pioneers of Sandy Gulch, 1849 trading center for miners of northeastern Calaveras County. The settlement, in an area that was home to many Miwok Indians, was named after the gulch where William and Dan Carsner found large nuggets of gold embedded in the coarse sands. Water for mining was brought from the middle fork of the Mokelumne River through Sandy Gulch and Kadish Ditches – quartz mining began in the early 1850s, and the first custom stamp mill in the district was located at the head of Sandy Gulch. School and election precincts were established early, and one of California’s many Hangman’s Trees stood near the center of town. 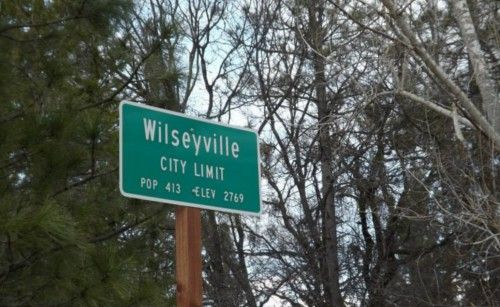