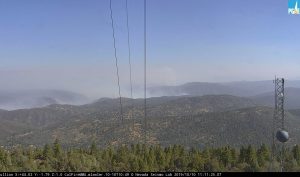 Update at 5:24pm: Containment continues to grow on the Briceburg Fire burning in Mariposa County.

This evening, CAL fire officials report the wildfire has reached 80 percent containment while holding at 5,563 acres. Full containment is still expected by next Monday and structure damage limited to one unit.

Officials recount that firefighters worked on containment lines and extinguishing “hot spots” within the fire perimeter. They add that smoke will be visible within the fire’s boundary for potentially several weeks and is not a concern as firefighters will be actively patrolling the area.

Original Post at 6:50am: Mariposa, CA — The Briceburg Fire in Mariposa County is now 5,563 acres and 75-percent contained.

Full containment is anticipated by next Monday, according to CAL Fire. The agency notes, “Minimal fire activity was reported overnight. Mop-up and suppression repair activities will continue today. Smoke will be visible within the fire’s perimeter for potentially several weeks and is not a concern as firefighters will be actively patrolling the area.

The cause of the fire remains under investigation. It has destroyed one structure. Highway 140 reopened to all traffic at six o’clock last night. All mandatory evacuations have been lifted. 829 firefighters remain assigned to the incident.