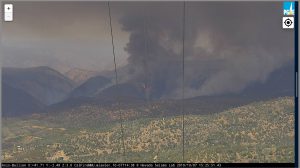 CAL Fire spokesperson Emily Kilgore, who is now assigned to the incident, acknowledges that impending hazardous fire weather is generating some concerns and that changing weather conditions have Incident Command busy working on modeling fire behavior predictions and response plans.

Update at 5pm: Just over 13 miles of Highway 140 is now closed due to the Briceberg Fire.

According to Caltrans, the closure is now from Colorado Road south of Briceberg to Savages Trading Post east of Incline.

According to the Mariposa County Sheriff’s Office, Mandatory Evacuation orders remain in place for both sides of Highway 140 from the Octagon to Buffalo Gulch Road, including Buffalo Gulch Road. Here is a map of the evacuation area.

A Red Cross Shelter has been established at the New Life Christian Church located at 5089 Cole Road.

Current areas under Fire Advisements are Colorado Road from Highway 140 to Davis Road and Davis Road; Highway 140 from Colorado Road to the Midpines Market; Ponderosa Way including all side roads, Deer Park, Leichtlin Lane and Feliciana Mountain Road; Rancheria Creek and Rumley Mine roads.

Update at 3:30pm: CAL Fire reports the Briceberg Fire is now five percent contained and double in size to 500 acres.

At last check, there was no containment and the blaze was estimated at 250 acres.

Update at 2:10pm: Here is the latest on the Briceberg Fire incident.

There is a good deal more air traffic in and around Columbia Air Attack Base. According to CAL Fire spokesperson Emily Kilgore, it is because the base is supporting fire operations by filling aircraft as well as sending some of its air units to the incident.

CAL Fire Briceberg incident officials say there is no updated acreage for the incident, which at last report this morning was described as 250 acres with no containment. Mandatory evacuations according to the Mariposa County Sheriff are three residences at the Octagon, the Briceberg Information Center, and the McCabe Flat Campground.

Highway 140 remains closed from 15 miles east of Mariposa at the Yosemite Bug Hostel to the Savages trading post in El Portal. There is currently no estimated time of reopening. People traveling to Yosemite National Park and El Portal will need to use Highway 41 or Highway 120.

Update at 7:25am: CAL Fire has released a new update this morning regarding the Briceburg Fire. It is now 250 acres and containment has dropped to zero. Highway 140 remains closed near the fire. The earlier evacuation advisories remain in effect. Air and ground resources will continue to battle the blaze throughout today.

Original story at 7am: Midpines, CA — CAL Fire reports that a wildfire along Highway 140 is 45 acres and 5-percent contained.

The Briceburg Fire ignited Sunday afternoon in Mariposa County near the intersection of Briceburg Bridge Road, north of Midpines.

A heavy amount of local aircraft assisted with the effort late yesterday. There is an evacuation advisory in place along both sides of Hwy 140 from the Octagon to Buffalo Gulch Road. In addition, there is advisement for Rancheria Creek Road and Rumley Mine Road. The Sheriff’s stresses that it is not a mandatory evacuation. Highway 140 remains closed near the fire area.