Near Full Containment On Briceburg Fire 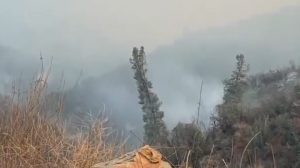 Midpines, CA — Officials have now gained 97-percent containment on a 5,563 acre wildfire that ignited earlier this month in Mariposa County.

The Briceburg Fire destroyed one structure and thankfully there have been no injuries.

CAL Fire reports, “Firefighters continue to secure and enforce control lines. Firefighters will patrol areas with roll-out potential. Smoke will be visible within the fire’s boundary for potentially several weeks and is not a concern as firefighters will be actively patrolling the area.”

While there were over 1,000 firefighters assigned to the incident about a week ago, the number has dropped to 155. There are no longer any air resources battling the blaze. The cause of the fire, which started on October 6, is still under investigation.