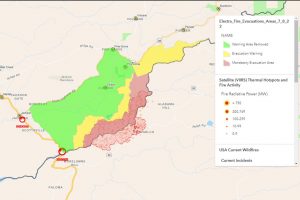 Update at 8:20 p.m.: The containment on the Electra Fire burning west of Jackson in Amador County and near Highway 49 and the Calaveras County line is 80% contained this evening.

The acreage is holding steady at 4,478 acres. CAL Fire detailed that the fire activity on the blaze was minimal with smoldering in stump holes and large downed fuels. They added that firefighters will continue to mop-up and reinforce control lines while suppression repair strategies are implemented overnight.

There remains 452 structures threatened and 1,782 personnel working the fire. Resources remaining on scene: 136 engines, 110 dozers, 34 hand crews, 28 water tenders, and 8 helicopters. All evacuation orders were reduced this afternoon. View the details below.

Update at 2:50 p.m.: CAL Fire is reporting several changes to the Electra Fire, burning in Amador County and near the Calaveras County line, with all evacuation orders have been reduced to warnings in those counties. They detailed “The only areas remaining under an evacuation order are zones within the fire perimeter.” CAL Fire provided this list of changes:

Further detains on the fire’s acreage and containment can be viewed below.

Original post at 6:05 a.m.: Amador County, CA — Firefighters continue to gain containment on the Electra Fire, that ignited Monday along Electra Road in Amador County just outside of Jackson and near Highway 49 and the Calaveras County line.

The blaze grew by 50 acres to 4,478 acres and the containment has climbed to 72%. There remain 437 structures threatened, with none destroyed or damaged. Fire officials report, “Minimal fire activity is expected today, with smoldering along the unburned fingers and islands.” They added that smoke production has diminished due to fire suppression efforts.

The areas of Amador Lane, Canyon View Drive, Fig Tree Lane, Timber Ridge Road, Dunshee Road, and part of Ponderosa Way have been reduced from an evacuation order to a warning zone.

The areas containing Gold Strike Rd and Clinton Bar Rd remain in an evacuation order zone. The south side of Hwy 88 and Hwy 26 from French Gulch Rd to the Calaveras County line remains in an evacuation warning zone.

In Calaveras County, in West Point, Wilseyville, and Railroad Flat, the evacuation warnings have been lifted in several zones, which can be found on the Zonehaven map. Also, evacuation warnings remain in Glencoe. Regarding road closures, the intersection of Highway 26 and Buckeye Lane just west of Ponderosa Road is shut down.

In the video box, Amador Sheriff Gary Redman had the opportunity to fly on a reconnaissance mission by CalFire Friday and take some videos of the devastation. Sheriff Redman detailed, “The videos show the overwhelming amount of destruction and how close it came to the Pine Acres neighborhood. There is still a tremendous amount of heat, which is indicated by all of the white in the burn scar.”