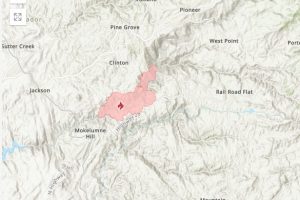 Amador County, CA – While the acreage (4,478) and containment (99%) numbers held overnight for the Electra Fire burning near the Amador and Calaveras County lines, firefighters will not achieve full containment today as anticipated.

CAL Fire yesterday predicted that there could be fire flare-ups and additional smoke due to the triple-digit temperatures over this weekend, as reported here. Fire officials are reporting, “There was a slight increase in fire activity yesterday deep within the fire perimeter.  The hot temperatures and low relative humidity allowed isolated islands of dense brush to flare up. Resources were already there to mitigate any spread.” They continued, “An additional firefighter hand crew has been ordered to help with patrolling and mopping up hot spots and smoldering stump holes within the perimeter of the fire. Fire suppression repair is ongoing.”

The increased fire activity has forced CAL Fire to push full containment by a day to Sunday, July 17th. Current resources on scene include 1,111 personnel, 4 engines, 3 water tenders, 4 hand crews, and 2 dozers. Additionally, all aircraft have been released from the scene.