Two Men Arrested For Being In Restricted Electra Fire Areas 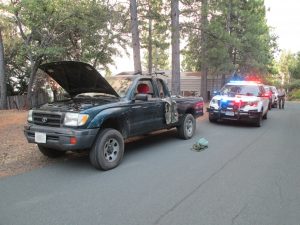 One of the vehicle's whose driver was arrested for unauthorized entry into a disaster area.

Amador County, CA — The two male subjects were found to be within the Electra Fire’s evacuation zones unlawfully and were handcuffed.

The blaze ignited along Electra Road near Highway 49 west of Jackson in Amador County and near the Calaveras County line on Monday. Amador County Sheriff’s officials detailed that these were separate incidents, both taking place yesterday. The first arrest was made just before noon when the CHP reported a vehicle that continued past the roadblock at Clinton Road and Butte Mountain Road in Jackson. The officer alerted deputies who headed to the area and located the vehicle and driver, 31-year-old Jose Martinezestrada of Plymouth, near Butte Mountain Road and Shirley Road.

After the investigation, it was determined that Martinezestrada had no legitimate reason for being in the evacuation zone. He was also arrested for unauthorized entry into a disaster area, violation of probation, possession of drug paraphernalia, and numerous vehicle code violations.

Later that day, at around 6:30 p.m., a Cal Fire law enforcement unit patrolling the evacuation zone discovered another vehicle in the area of Clinton Bar Road and Robin Lane in Pine Grove.  Deputies, with the assistance of Tuolumne County Sheriff’s Deputies, responded to the area and ultimately determined that the driver, 39-year-old Dustin Johnson of Pioneer, had no legitimate reason for being in the evacuation zone.  Amador Sheriff’s officials report that Johnson ran from them but was apprehended after a short chase.

A search of Johnson’s vehicle turned up two firearms, one of them loaded, along with illegal fireworks and suspected methamphetamine. Johnson was taken into custody for unauthorized entry into a disaster zone, illegal possession of a firearm, possession of illegal fireworks, obstructing a peace officer, and various drug-related charges.

Law enforcement patrols will continue to provide security and protection in the evacuation zone for the duration of the Electra Fire. Additionally, Sheriff Gary Redman has arranged for teams of allied agencies to assist us in the 24-hour protection of vacated homes and properties.

As a reminder, any persons found within the evacuation zone without a lawful reason will be subject to arrest.