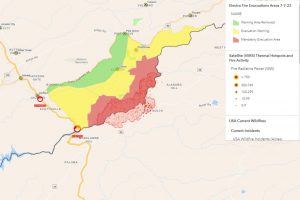 Update at 11:55 a.m.: CAL Fire is turning to the public for help to determine the possible cause of the Electra Fire. This morning, an alert was issued for witnesses to come forward. CAL Fire is asking that anyone who was on Electra Road when the flames broke out at around 3:44 p.m. on July 4th to call the tip line at 1-800-468-4408 with any relevant information. A further update on the fire can be viewed below.

Original post at 6:05 a.m.: Amador County, CA — Containment climbs while the acreage inches up in the Electra Fire, which ignited Monday along Electra Road in Amador County just outside of Jackson and near Highway 49 and the Calaveras County line.

The blaze grew slightly overnight to 4,428 acres and the containment has increased to 65%. There remain 891 structures threatened with none destroyed or damaged. Fire officials report that the flames’ activity was minimal overnight. They added, “Overall fire behavior was diminished due to the success of the firing operations that have burned out a few of the large remaining green pockets and islands.”

There are 2,179 personnel working the blaze with these resources on the scene: 201 engines, 59 hand crews, 48 water tenders, 35 dozers, and 15 helicopters. More evacuation orders have been lifted and roads reopened, with details earlier reported here.

The public is reminded to stay clear of the area, as on Wednesday two men were arrested for being in the evacuation zone illegally, as detailed here. The cause of the fire remains under investigation and the expected full containment is July 18th.