Update: PG&E Says Equipment Not To Blame For Electra Fire 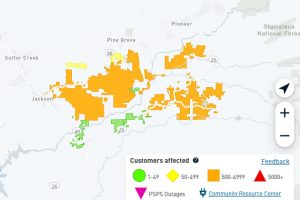 Update at 6:35 p.m.:  PG&E reports that crews have made significant progress today responding to outages now impacting about 2,300 customers in parts of Amador and Calaveras Counties due to the Electra Fire. The utility says it has deenergized several distribution lines for firefighter safety in the area at the request of Cal Fire crews battling the blaze.

Company spokesperson Megan McFarland detailed, “Working with Cal Fire, PG&E was given access to priority areas of the fire where are assets were no longer at immediate risk and was able to reenergize some transmission and distribution lines. PG&E also made progress today installing temporary generation, which will allow us to reenergize more customers.” She added, “PG&E has been granted access to begin staging poles and other equipment at the Electra hydroelectric powerhouse so that we will be able to make repairs quickly and efficiently once we gain access to damaged equipment.” Further details on PG&E equipment not sparking the fire can be viewed below.

Original post at 9 a.m. written by BJ Hansen: Jackson, CA — It remains unclear what ignited the Electra Fire burning near the Amador and Calaveras County border.

PG&E’s equipment has been responsible for several fires in recent years, including the nearby Butte Fire that burned through Amador and Calaveras in 2015.

When the Electra Fire ignited on Monday afternoon, PG&E cut power to around 15,000 nearby customers.

The company de-energized several distribution lines for firefighter safety at the request of CAL Fire.

PG&E spokesperson, Megan McFarland, provides more information this morning, stating, “Based on the reported location and timing of the Electra Fire and subsequent PG&E outages, PG&E understands PG&E equipment was not involved in the ignition.”

Working with fire officials, PG&E was given access last night to start restoring power in areas no longer deemed a risk.

On the issue of the cause, Amador County Sheriff Gary Redman stated earlier this week that the fire started near the Vox Beach area. He stressed that he did not know the cause, but suggested based on the area (recreation spot), it could be something like fireworks or a barbecue. No additional information has been released.