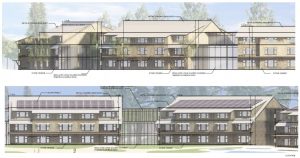 Sonora, CA – After a six hour meeting, Tuolumne County Board of Supervisors voted 5-0 to approve the Environmental Impact (EIR) Report for the Terra Vi Lodge Yosemite project with a limit on green house gas emissions. Most of the time was spent assessing possible EIR errors, and several hours of public comments, many against and some in support of the project.

Additional discussion by the supervisors related to the site development permit took another hour and also passed 5-0. The development permit addressed additional well monitoring due to neighbor’s concerns about their wells and drought. It was added that current monitoring wells on the property be used to monitor ground water levels similar to the production wells and that data be report to the state. Reduction of vegetation for fire clearance was discussed but no additional requirement was added. The supervisors discussed the helicopter landing pad and stated that no private helicopters would be allowed to use the landing site, with FAA and Caltrans able to fine any improper non emergency use of it.

Those in favor of the new lodging praised its economic and tax boost for the area while those opposed voiced concerns of a lack of water, wildfire safety and traffic. Karl Rodefer noted that the California Environmental Quality Act (CEQA) which requires an EIR process has taken three years, stating “This is far from rushed” he agreed with Supervisor John Grey that to let incoming supervisors decide would be “kicking the can down the road” and delay the project another six months noting, “We’re trying to do the best that we can, all be at with a limited timeframe. This board has been immersed in this project at least the last six months and our staff has been immersed in it for the three years.” He concluded, “I believe after looking at it, and I know the opponents; John Buckley at CSERC [Central Sierra Environmental Resource Center] and maybe the river trust, you’re not going to agree with me. I believe our EIR does meet the adequacy standard.” Sherry Brennan added she believed the demand for lodging from people wanting to visit public lands in Tuolumne will only increase in the future. Supervisor District 3 Anaiah Kirk noted the board’s process wasn’t perfect, but said, “I don’t think any way that we were to do this, I think it is still going to be litigated. Unfortunately the only people who win in these situations are attorneys.”

As earlier reported here, the planning commission approved the plans and it was appealed to the board.

With this approval the project developers, Hanji Corporation an investment group out of Los Angeles, can move forward with any grading or building permits.

As reported here the hearing on whether to approve the Terra Vi Lodge at Yosemite ended abruptly on Tuesday evening. The project was in the news on May 2, 2019 when the public comment period opened as detailed here.

Two weeks ago the supervisors supported the luxury tent camping resort, Yosemite Undercanvas, planned for Highway 120 and Hardin Flat Road on Dec. 18 as reported here. Yosemite Undercanvas includes 99 rental tent units, a reception tent, mobile kitchen, laundry facilities and bathrooms spread over 80 acres. An appeal of the 5-1 approval by the planning commission was filed, sending it to the board of supervisors. Conditions were added to the project by the supervisors including not allowing the developer to use wood stoves for heating the luxury tents, they must use propane, pedestrian pathways to the YARTS bus turnouts, and using roughly $272,000 in traffic impact mitigation fees collected from the developer for improvements to Hardin Flat Road.