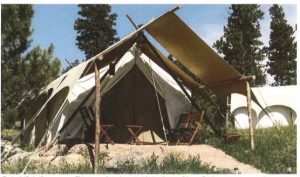 Tents Like This Would Be At The Proposed Yosemite Under Canvas

The Yosemite Under Canvas project was reviewed by the Tuolumne County Board of Supervisors last night. The project had earlier been approved 5-1 by the planning commission, but an appeal was filed, sending it to the board of supervisors.

In the end, the supervisors voted 5-0 in support of the planning commission’s decision. However, supervisor John Gray, who represents the south county, added some conditions to the project approval, and they were okayed by the fellow board members. Related to fire concerns, the developer will not be allowed to use wood stoves for heating the luxury tents, and instead must use propane. In addition, pedestrian pathways must be developed for the nearby YARTS bus turnouts. Also, the roughly $272,000 in traffic impact mitigation fees collected from the developer will be used for needed improvements to Hardin Flat Road.

The resort will be at the intersection of Highway 120 and Hardin Flat Road. It includes 99 rental tent units, a reception tent, mobile kitchen, laundry facilities and bathrooms spread over 80 acres.