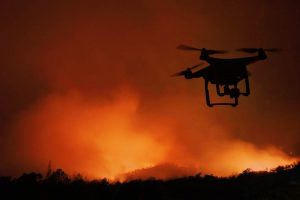 Stanislaus National Forest officials say that an unauthorized unmanned aerial vehicle (UAV) flew over the fire yesterday, which necessitates the grounding of all aerial support for safety reasons. When these instances occur, they can prolong firefighting operations and even lead to wildfires becoming larger when aircraft are not able to drop fire retardant and water, monitor wildfires from above, or provide tactical information to firefighters.

Officials note that as with all wildfire incidents, there is a Temporary Restricted Flight zone around the Quarter Fire to help ensure aerial support safety. Flying within this restricted area can have very severe consequences, including up to one year in federal prison and/or a fine of up to $100,000. Pilots may also have their license suspended or revoked. The Federal Aviation Administration was notified.

The Tuolumne County Sheriff’s Office shares it was called into the fire area to investigate. Along with reiterating the risk and danger to the community and fire personnel, officials note operating a UAV over a fire zone is a state and federal crime.

Today, firefighters are continuing to reinforce the fire line and mop up hot spots. While minimal smoke and fire activity are anticipated, potential spotting from burning and/or rolling debris crossing the containment line and igniting unburned fuel outside the fire perimeter is still a concern.

There is not a current advisory evacuation order for homes off Forest Road 3N11 and the north side of Cedar Ridge. An earlier one was lifted Monday evening. As very dry weather conditions will persist throughout the area and temperatures near 100 degrees are expected to continue, there is potential for gusty winds during the day.

With containment continuing to grow, the incident is being turned over to the Stanislaus National Forest Type 4 Team. The Fire Incident Commander continues to request that the public stays out of this area and all access roads to the fire to avoid interfering with fire crews and equipment supporting suppression and rehabilitation efforts.

Officials stress that people attempting to access the area and surrounding roads remain an ongoing safety issue and appreciate the public’s support to reduce concerns.

Fire Overview: the Quarter Fire’s size held at ten acres, the containment jumped from 10-percent as reported here on June 23, to 60 percent later in the same day here. Containment details were posted here.