Great Progress Made On Quarter Fire 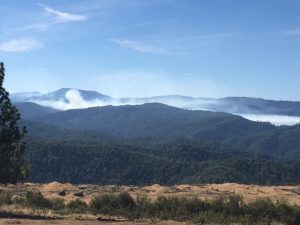 Sonora, CA – Crews have made great progress on the Quarter Fire burning near Cedar Ridge.

While the fire size is holding at 15 acres, the containment has jumped from 10-percent as reported here this morning, to 60 percent this evening. Fire officials report the fire’s activity was “calmer,” allowing for improved access by hand crews and in turn minimizing the need for air support. Remaining a concern tonight is the potential for spotting from burning debris, heavy timber, and unburned fuel that could potentially reignite. Crews are focusing on mitigating those hazards, relay forest officials.

Firefighters were able to mop up hot spots using portable backpack water pumps near hand lines that were put in on Monday. Dozers began working on fire line rehabilitation efforts on Tuesday. Road improvements along FS Road 3 N02 aided crews in accessing the bottom of the fire. Water bars were completed on the Mount Elizabeth Fuel Break.

There is 179 personnel on the scene with 7 hand crews, 1 helicopter, 4 engines, 4 dozers, 1 water tender battling the blaze. The Incident Command Post has moved to the Mi-Wok Ranger Station. Forest officials advise that if progress continues and fire behavior remains low, the incident will “likely be turned over to a Forest Type 4 Team in the next couple of days.”

Notably, the request remains for the public to stay clear of the fire area to avoid interfering with fire crews and equipment supporting suppression efforts, something that has been an issue over the last three days, according to forest officials.

Fire Overview: the fire size was decreased to 10 acres, the containment jumped to 60 percent later this same day here. A drone’s interference in the fire fight was detailed here. Containment details were posted here.