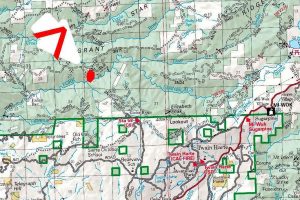 Sonora, CA — The Quarter Fire burning near Cedar Ridge has climbed to 90-percent and has officially transitioned to a Stanislaus National Forest Type 4 Team.

Most crews and equipment were released from the blaze leaving 93 personnel, 3 hand crews, 2 helicopters, 4 engines, 4 dozers, 1 water tender continuing to work the fire. Today crews are focusing on efforts to reaching full containment while also transition to rehabilitation work and continuing some mop up. The estimated full containment is expected on Wednesday, July 22 around noon, according to incident command.

The acreage remains at 10 acres with the flames burning fuels that include short grass that is about a foot tall, timber understory, and about two feet of brush.  Weather conditions remain dry and hot.

As reported here on Wednesday, an investigation into a drone that flew over the fire remains ongoing. Additionally, even with the blaze winding down, fire officials ask the public to avoid the area.

Previous Updates: while the fire size held at 10 acres, the containment jumped from 10-percent as reported here on June 23, to 60 percent later in the same day here. A drone’s interference in the fire fight was detailed here.