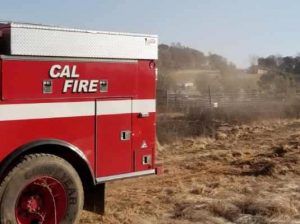 Sonora, CA – As 2019 draws to a close, local CAL Fire officials look back on a fire season that shows more residents are clearly becoming fire-wise.

Tuolumne Calaveras Unit spokesperson Emily Kilgore shares she and her colleagues are starting to see a slight downward trend in fire ignition incidents as compared to the past couple of years, although the top three fire causes continue to be escaped debris burns, equipment/tools and vehicle-related.

Statistics through early December indicate CAL fire TCU responded to 278 fires that burned a total of 937 acres, compared to 2018 when there were 256 ignitions impacting 13,475 acres.

By comparison, the largest regional wildfire for the Mother Lode in 2019, the 5,563-acre Briceberg incident in Mariposa County, for which TCU provided assistance, was five times larger than all of the unit’s fires combined.

She also recalls, “One of the 2018 incidents was the Waverly Fire (near Linden), which involved over 12,000 acres.” Separating it out from the rest of the ignitions would otherwise leave a total of 1,636 acres for the unit in 2018.

“So, we are seeing a decrease in ignitions as well as in the number of acres burned,” Kilgore maintains. Asked if the Columbia aircraft had a busier than normal season, she replies that they were taking to the air at a normal response level for a fire season, including providing regular assistance to surrounding units.

2/3rds Of Local CAL Fire Incidents Kept to < One Acre

Kilgore attributes the lower stats to increased public awareness and support, residents taking responsibility to mitigate some of their fire risk, as well as individuals and neighborhoods, becoming more fire aware. Notably, participation is up for educational outreach activities and programs that have to do with wildfire preparation.

There is also a big upswing coordinated activities by residents in various areas focused on establishing Firewise USA communities, particularly in Tuolumne County, according to Kilgore, who says that prior to 2019, the county did not have any such nationally recognized communities and now there are nearly a dozen such sites in the application phase or approved.

The Firewise USA program empowers communities and neighborhoods such as subdivisions by providing tools and resources, including grants to reduce wildfire risk and encourages neighbors to collaborate, and develop a plan for risk management and mitigation within the area to minimize fire starts and spreads.

As far as takeaways, Kilgore states, “I think our slight downward trend can continue — residents need to be aware — continue to educate yourself on wildfires and how they spread. One spark can create a wildfire and the better that we have attention to creating one less spark and one less wildfire the less activity we will see in our unit.”

Clarke Broadcasting also asked Kilgore for cause data relating to a sampling of this fire season’s incidents within the unit and she reports as follows:

The June 23 Gann Fire near New Hogan Lake that burned 22.1 acres was caused by shooting activities but has no information on whether there has yet been any legal action.

The Aug. 15, 24-acre Preston Fire near Preston Lane in Jamestown was ignited by a juvenile playing with fire, who was referred to juvenile probation.

The Aug. 17 Groveland Fire near the airport, which wound up at 2.26 acres, had an undetermined cause, as did the 11.44-acre Knights Ferry Fire.

The Oct. 15 Standard Fire, contained at 1.13 acres after destroying two outbuildings, was caused by debris burning.

The Nov. 19 Rushing Fire near Long Barn that burned 8.77 acres was triggered by a vehicle.