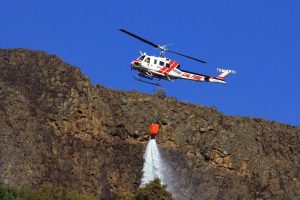 CAL Fire helicopter 404 from the Columbia Air Attack Base

According to Tuolumne Calaveras CAL Fire Unit spokesperson Emily Kilgore in the December 2019 end of year report here “The Gann Fire near New Hogan Lake was caused by shooting activities but has no information on whether there has yet been any legal action.”

Update at 5:50 p.m.: Crews are getting a handle on the Gann Fire along Gann Road, near Hogan Dam Road and New Hogan Lake in Rancho Calaveras.  CAL Fire spokesperson Emily Kilgore reports that the fire’s forward rate of spread has been stopped at 22 acres. The flames broke out in grass and brush. No structures were threatened. Aircraft are expected to be released soon, according to Kilgore, who adds that ground crews will continue working towards full containment and mopping up for the next several hours. The cause of the fire is yet to be determined.

Update at 5:30 p.m.: Crews in the skies and on the ground continue to battle the “Gann Fire” near New Hogan Lake in Rancho Calaveras, southeast of Valley Springs. The flames broke out in grass and brush along Gann Road, near Hogan Dam Road. CAL Fire spokesperson Emily Kilgore reports the fire remains 10 acres in size. She adds that there are no details on any containment yet on this blaze.

It is being called the “Gann Fire.” CAL Fire spokesperson Emily Kilgore reports that the fire is 10 acres in size and burning in grass and brush.

No structures are threatened at this time. We’ll bring you updates as soon as new information comes into the news center.