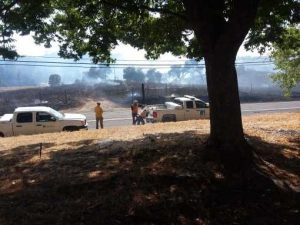 Preston Fire burn scar across the street from the Jamestown Apartments

Update at 7 p.m.: CAL Fire spokesperson Emily Kilgore relays that the Preston Fire has officially been called fully contained at 20 acres. Out of originally 1, 457 PG&E customers power that was shut off to allow firefighters in the area to safely battle the flames only 54 remain without power, but the utility gives a 7:30 p.m. restoration time. What sparked the blaze is under investigation. Details from CAL Fire about a juvenile suspect are here.
Update at 6:40 p.m.: CAL Fire spokesperson Emily Kilgore reports that crews will work into the night to gain full containment on the Preston Fire that is currently 20 acres and 60 percent contained. What sparked the blaze in a grass field off of Preston Lane and Seco Street in Jamestown around 3:30 p.m. remains under investigation. PG&E has turned the power back on for all but 458 customers in the area of the fire. Due to power lines around and within the perimeter of the blaze, PG&E cut off power for safety. The utility has a 7:30 p.m. restoration time.

Update a 6:10 p.m.: PG&E has restored some of the power that was shut off to allow firefighters to battle the Preston Fire. Originally, 1457 customers’ power was cut from Seco Street to 9th Street and Campo Seco Road to Seco Street. Currently, 992 remain without electricity in that area. CAL Fire spokesperson Emily Kilgore reports that power lines framing and within the perimeter of the flames burning in a grass field along Preston Lane and Seco Street in Jamestown forcing the power outage.

To view video footage shot by Erin Hall click here: Preston Fire in Jamestown and for Steve Morfoot, click into the image box and access the link. A special thanks to our community partner Michelle Fyfe for sending in photos.

The blaze is located in the area of Preston Lane and Seco Street in Jamestown and sparked in grass just before 3:30 p.m. CAL Fire officials report that air tankers and Copter 404 have been released, also noting great support from the Tuolumne County Sheriff’s Office, CHP Sonora Unit, Sonora City and Tuolumne County fire departments. PG&E estimates restoration time to those without power as approximately 7:30 p.m.

To view video footage shot by Steve Morfoot, click into the image box and access the link.

Update at 4:04pm: The Preston Fire is now at 24 acres with structure threats migrated, according to CAL Fire officials.

Forward progress has been stopped, according to CAL Fire spokesperson Emily Kilgore, although there is not yet a containment estimate for the Jamestown fire, which sparked in grass just before 3:30 p.m. Multiple units remain on scene. Fire officials ask that community members stay clear for now.

PG&E crews are on hand as power is being cut from Seco Street to 9th Street and Campo Seco Road to Seco Street for the safety of fire personnel, who are working rapidly to contain the blaze near several powerlines within the perimeter.

Update at 3:57pm: Additional aircraft is under request to battle the Preston Fire, bumping up against Seco Street, according to CAL Fire officials.

Update at 3:45 p.m.: CAL Fire spokesperson Emily Kilgore tells Clarke Broadcasting that the titled “Preston Fire” is 20 acres in size and structures are threatened. Currently, there are voluntary evacuations in the area.

Original post at 3:30 p.m.: Jamestown, CA — Fire resources including Columbia air are battling a vegetation fire in Jamestown and roadways are being closed.

CAL Fire reports the flames are in the 10200 block of Preston Lane near Seco Street. The CHP has Seco Street are closed between Preston Lane and Rolling Oaks Drive. There is no additional information on the blaze in regards to its size or rate of spread or whether any structures are threatened. We will update with more details as soon as they come into the newsroom.