Cause Released For Fire Behind Local Sonora Business 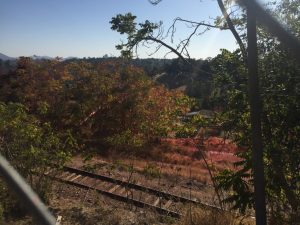 Sonora, CA – As flames ripped through the grass and brush behind the Clark Pest Control building in Sonora yesterday afternoon and it did not take long for fire investigators to determine the cause.

Eliminating all possibility of ignition sources like mechanical or electrical, Sonora Fire Chief Amiee New tells Clarke Broadcasting that most of the area burned up in the acre fire left no trace of the exact ignition source. She adds, “They either had some type of lighter, or open match, or something that ignited the fire, as the cause was ruled an open flame from a transient.”

Investigators came to that conclusion after discovering a small transient camp with a telltale signs left behind. Chief New explains, “It doesn’t look like they had any type of like ringed area for a fire. It was just basically cans and food material in a certain location that was evident of where the fire started.”

No one was found in the area when firefighters arrived on the scene in the 420 block of Hospital Road, as earlier reported here. This was the second vegetation fire to ignite in the Sonora area within about ten minutes of each other and just miles apart. The first fire, detailed here, was ignited in the Standard area on Serano Road. Chief New says it was lucky that Columbia aircraft were in the area as she exclaims, “Columbia Air Attack and the air tankers were flying overhead and spotted the second fire just behind Clark Pest Control and did a retardant dump and stopped the forward progress of the fire.”

What sparked the initial fire in the Standard area is still under investigation.