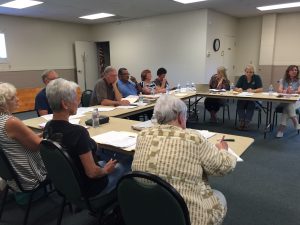 Sonora, CA —   After months of controversy surrounding allegations of misappropriation of funds, an auditor gave Mother Lode Fairground staff a glowing review at Wednesday’s board meeting while audience members called for the Fair Manager and CEO Stacey Dodge to remain on the job.

As previously reported, the conflict came to a head at last month’s meeting when Dodge surprisingly resigned, tearfully stating that she did not want to be a part of the problem.  That problem involves Dodge and two board members, Jan Costa and Peggy Lee, and accusations from both sides regarding poor money management and monkey business, which eventually led to Dodge and another staff member filing harassment complaints against Costa and Lee to the California Department of Human Resources.

Wednesday night’s meeting was less contentious; it started with public comments where several audience members applauded Dodge and called for the board to find a way to make her stay. Jim Costello, a member of the Tuolumne County Chamber of Commerce, challenged the board to rectify the situation, stating, “How are you going to get the quality, the talent, the experience, the commitment to the community…You need to figure out how to keep Stacey — whatever it takes. She’s earned the right for another chance at this…talk her out of this. She needs to hear it from you [the board].”

That was followed by a report from Bob Haff, with Carlson, Haff & Associates, hired by the board to conduct an audit of the fairground’s 2014 financial statement. Noting that Dodge inherited things when she became the CEO in August of that year, Haff stated, “The current staffs’ internal controls of the cash disbursements were some of the best I have ever seen.”  He went on to acknowledge that the paper trail was easy to follow to the end.

Dodge told Clarke Broadcasting after the meeting that she now feels vindicated.

While Board member Lee maintains that Dodge does not answer her questions regarding finances and fears there is not enough money in the current budget to finish the year, she would not rule out working with Dodge. Lee said, “I can work with Stacey as long as she follows the board’s directions.” Other board members expressed a need to move forward, hoping that both sides could put their differences in the past and unite.  However, Dodge says, “It’s too late for that” and she wants to move on with her life. Although, she did extend her resignation date by one week to July 29 so she could attend the board meeting following this year’s Mother Lode Fair, which is July 8 – 10.

Also of note, past criticisms questioning board members commitment to the fairgrounds prompted President Dan Brown to include as an item on the meeting’s agenda to have each member of the board discuss their personal goals as a member of the Fair Board.  All stated a desire to help the Mother Lode Fair thrive, with Lee indicating a top priority was to establish the fairgrounds as an event destination.

Additionally, members Marge Kiriluk and Micki Rucker were appointed to an ad hoc committee to come up with house rules for board conduct during a meeting, which will have to be approved by the board.

Among those in the audience were Sonora City Councilmember Connie Williams and Tuolumne County District 1 Supervisor Sherri Brennan. As earlier reported, Tuesday the county board of supervisors postponed sending a letter to the Governor’s Office requesting local vetting in the fair board appointment process.