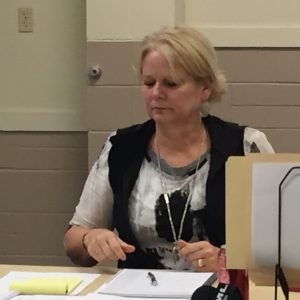 Sonora, CA — There were more fireworks and surprises at the Mother Lode Fairgrounds Board meeting Wednesday night.

Immediately after adjourning, Fair Manager and CEO Stacey Dodge, in the role since 2014, voice cracking and wiping away tears, resigned. “I don’t want to be in anybody’s way or part of your problem,” she said. “So, this is my resignation. I’d like to see the fair through…I’d like to prove to some of your board of how wrong you are, and my last day will be July 22, or you can fire me now.”

The move brought gasps from the crowd and some screams of “no.” Some people heckled Board President Dan Brown as he later left the meeting chastising him for his lack of support for staff.  Earlier during public comment, one person not only called Brown a “bully,” but called for Brown’s resignation after witnessing an argument Tuesday at the fairgrounds office between Brown and Dodge. Before Dodge’s surprise announcement, Brown had apologized stating, “I was out of line, raising my voice, both of us did. So, I will make a public apology for that.”

This is not the first time tempers have flared as accusations of missing money, monkey business and charges of harassment by board members Jan Costa and Peggy Lee led to staff filing complaints to the California Department of Human Resources.  As previously reported, last month’s meeting also began with a surprise as it was announced that member Bryan Adcox had resigned and Costa and Lee were absent leaving the board without a quorum to conduct business. That brought up allegations that the two purposely missed the meeting to avoid scrutiny over implementing policy changes, costly legal fees and travel expenses. It is a charge Costa denied at Wednesday’s meeting defiantly stating, “It wasn’t a conspiracy or strategy. I didn’t know of anyone else not being at the meeting. I’m also tired of hearing about policy and procedures and by-laws and legal fees. We did what we had to do. Changes have been made and we’re moving on.”

Attending his first meeting after being appointed to the board by Governor Jerry Brown just this week, Albert Barreno had this remark about Dodge’s resignation, “I did not see that coming. I am saddened by it. I really believe that we could make this whole thing work…The past is what it is… I’m more concerned about the future and moving forward than fixing blame.”

Board Vice President, Missy Marino and member Marge Kiriluk were disappointed with Dodge’s resignation and called on the public to come out in force and demand she stay on as CEO at next month’s meeting on June 22nd at the Creekside Building. A gesture Dodge appreciates but tells Clarke Broadcasting she is done, stating, “I want to work through fair and get the audit complete so I have evidence that there’s no monkey business or money missing anywhere and move on. Life’s too short.” Regarding whoever replaces her, Dodge offers this advice, “If this board remains, good luck.”