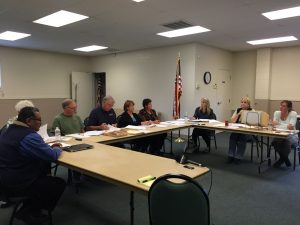 Sonora, CA — The Tuolumne County Supervisors postponed sending a letter to Governor Jerry Brown requesting that the county be involved in vetting candidates for the Mother Lode Fair Board.

We’ve reported previously that there have been several fireworks at recent fair board meetings, and the Supervisors would like to see more local input when it comes to Governor Jerry Brown’s appointments. The idea was proposed by District Five Supervisor Karl Rodefer and District One Supervisor Sherri Brennan. The draft letter notes that local business confidence in the Fair Board leadership is a critical piece in the continued solvency of the fair and fairgrounds. Business leaders such as the Tuolumne County Chamber of Commerce’s Mike Ayala and the Tuolumne County Business Council’s Glenn Caldwell, spoke in favor of sending the letter.

Under the county’s proposal, the Governor would still have the final say regarding who is appointed, but the county would create an ad-hoc committee to review the applicants. The group would include a Supervisor, Sonora City Council member, a representative from the Governor’s Office, a member of the agricultural community and a member of the business community. The plan received a wrinkle when the Sonora City Council voted 5-0 against sending the letter on Monday, giving indication that they are opposed. However, Councilmember Connie Williams addressed the Supervisors Tuesday, speaking on behalf of herself, and encouraged the county to allow the city additional time to review the idea. She noted that the letter was received late and there were some concerns about some of the specific content. She asked that the city have additional time to investigate the proposal. The Supervisors voted 5-0 to table the matter until the county’s next scheduled meeting in two weeks.

The Supervisors noted that the fairgrounds are a vital asset both for the local economy and for the community disaster response capabilities.