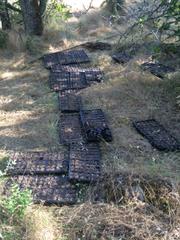 Calaveras County, CA — Sheriff’s deputies are hitting the streets to make sure medical marijuana cultivators in the county sign up before the month end deadline.

As previously reported in May, county supervisors approved a medical cannabis cultivation urgency ordinance requiring cultivators to register their sites by June 30. “We’re trying to get people to come into compliance. We’re doing knock and talks, basically, to the folks that we know have marijuana grows,” shares Sheriff Rick DiBasilio. He adds, “Deputies are stressing to the cultivators to make sure they’re in compliance come the deadline or we’ll be back and they’ll be fined.”

It is a daily event for the department’s marijuana task force, which includes two deputies hired to work solely on inspections and issues related to the pot ordinance.  The registrations are handled by the counties planning department which will share the information with the sheriff’s office to conduct inspections. The registration fees are $100 for personal growers; $200 for caregivers; and $5,000 for commercial cultivators. DiBasilio believes those costs will give his department more eyes and ears on the street, explaining, “Would you start a business…pay a bunch of money…then know that your neighbor next door has the same business and he’s not paying the fees?” Sheriff DiBasilio is banking on legal growers crying foul and turning in other cultivators who are breaking the rules.

Illegal grows or cultivators that failed to register by the deadline or bought their property after May 10th, the date stipulated as the cut off by the mandate, will have their plants eradicated, according to the sheriff. He notes the ordinance does not allow deputies to cut down plants where growers have registered but may not be in complete compliance. Instead, fines of a thousand dollars a day can be levied until the problem is rectified.

Of note, as reported earlier this month, deputies eradicated two illegal pot grows in the county numbering more than 13,500 plant, which word found on private property by the land owner.