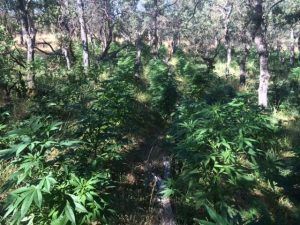 Valley Springs, CA – A second pot grow is found in just under a week by the Calaveras County Sheriff’s Department.

After finding strangers trespassing on his land a couple weeks ago along Hogan Dam Road, a private property owner alerted law enforcement to a possible pot grow. The owner questioned the two Hispanic men who admitted to working a grow on the property. Sheriff Rick DiBasilio indicates, “Evidently, they told the property owner that they had permission from somebody but he didn’t know who that somebody was.”

An aerial search of the land spotted the grow site. On Wednesday morning, a search warrant was served on the property Sheriff DiBasilio shares, “On our way in we heard some noises up in the high rock areas. I’m sure those were their scouts that were watching for us. We did find a two way radio.”

Also, found were 3,536 pot plants with campsites nearby. Sheriff DiBasilio states, “We found two areas that they used for sleeping quarters and there was another area that was a lookout point for them.” At one of the campsites, investigators discovered a Mexican national identification card for a Hispanic male but those living there had fled the scene. Also left behind were several air powered pellet guns.

Sheriff DiBlasilio noted that the plants were hybrids, which bring in a higher price and put the street value at anywhere from 50,000 to millions of dollars.

As previously reported, just last Thursday, another property owner helped law enforcement find a more than 10,000 plant cultivation, which was eradicated after a land owner on Rock Creek Road in Copperopolis spotted a hose coming out of his pond that led to some plant beds. DiBasilio adds both bust were on properties that he calls “historical sites”, meaning marijuana cultivations have been found there year after year. Regarding how many of these sites exist in the county, he chuckled and replied, “You don’t have enough fingers and toes.”