Are Five Marijuana Plants Too Much? 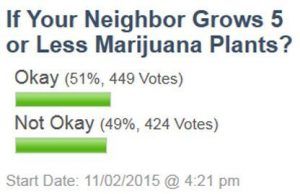 The Tuolumne County Board of Supervisors recently readdressed the issue of marijuana after several new state laws were signed by Governor Jerry Brown. Details of their discussion are in the news story “Decisions Coming On Medical Marijuana” here. Currently multiple groups are seeking signatures to qualify new ballot measures to legalize recreational marijuana, details are here.

A different informal poll earlier this week asked “Should A Law Enforcement Officer Be At Local High Schools More Often?”  The majority (74%) voted Yes while 19% said No and 7% said Don’t Know. As heard on Mother Lode Views Sonora Police Chief Mark Stinson noted that his department has two less school resource officers from a peak staffing years ago and is currently one position shy minimum level staffing.

A school resource officer in South Carolina made national news and was fired over an incident involving a teen at Spring Valley High School at the end of October. The girl in a widely released video remains unidentified, but she has obtained a prominent attorney — Todd Rutherford, who also serves as House minority leader in South Carolina’s legislature. The Associate Press says federal and state investigations into his actions have just begun, so it will be unknown for some time whether he will face charges.

In May the National Center for Education Statistics released a Public School Safety and Discipline: 2013–14 report. Their survey of schools found 60% of 28,640 rural community public schools had some type of security personnel present at the school at least once a week. The 60% were made up of 49% security guards/personnel, 30% School Resource Officers and 21% sworn law enforcement officers who are not School Resource Officers.