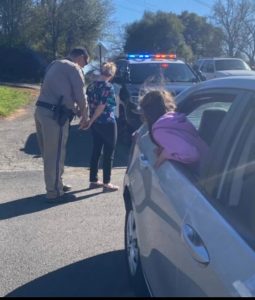 DUI arrest with child in the car

Sonora, CA – The Sonora Unit of the CHP has released some sobering stats that expose a recent frightening trend in DUI crashes and arrests.

Since the beginning of the year, there have been five adults arrested for being under the influence with children in their vehicles. In three of those cases, the drivers were involved in crashes. CHP spokesperson Officer Steve Machado says, “We’ve been very fortunate in that of the seven children involved in those crashes, only one sustained minor injuries.”

One collision had an even more concerning outcome. Machado detailed that it happened last month when 36-year-old Adam Baiko of Sonora was making a left turn onto Twain Harte Drive from eastbound Highway 108 in a van. Coming in the opposite direction, was 38-year-old Kenneth Davis Jr. and his 3-year-old passenger in a pickup. Machado stated that Baiko failed to yield the right away to Davis and the vehicles collided. Baiko was flown from the scene suffering major injuries. Davis suffered minor injuries and the child was unharmed. During further investigation, it was determined the drivers were drunk behind the wheel. Baiko and Davis were arrested for DUI with the added charge of child endangerment for Davis.

This is not the first time both drivers in a collision have been handcuffed for being DUI this year. In January, the CHP responded to a crash where they reported the drivers were intoxicated and one ended up hitching a ride with the other, as detailed here.

Another one of those DUI crashes resulted in murder charges for 63-year-old Theodore Young of Sonora after a Modesto woman later died of her injuries. The collision happened in January on Highway 108 near Chicken Ranch Road. The CHP relayed that Young’s truck drifted into oncoming traffic, as reported here.

Just this week, an Oakdale man fleeing from CHP officers was arrested for DUI and his charges were enhanced to a felony because he already had other driving under the influence charges against him, as detailed here.

Finally, it was the quick actions of another driver that witnessed a sedan near Tuolumne Road and Carter Street in Tuolumne all over the roadway that may have helped to avoid a tragedy. Machado stated, “In an incident like this where someone called in an intoxicated driver. We can respond and were able to make an arrest to get them off the road to prevent other people from being injured or possibly killed.”

The public can be a big help to the CHP by taking the same preventative action as that driver. Machado added, “We just really want to encourage the public to call 911. And if they can, get a vehicle description, a color, maybe the license plate number if they are able to see it and a location.”

The CHP stressed that if arrested for DUI with children in the vehicle, it adds a felony charge of child endangerment. There is also a DUI sentencing enhancement if they are under 14 years old or younger. Those records are also forwarded to child protective services.