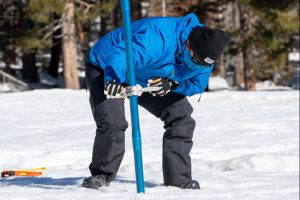 Sonora, CA — A dramatic reversal from a month ago as the water content is now lower than the historical average after an incredibly wet December in California, but no significant rain or snow in the past month.

It demonstrates the state’s challenges in managing its water supply with today’s second snowpack survey by the Department of Water Resources (DWR) showing the amount of water in the Sierra Nevada mountain’s snowpack at 92% of what is normal for this date. That number was 160% in December after heavy rain and snow, as detailed here.

Noting that this past January was one of the driest on record, DWR spokesperson Sean de Guzman detailed, “Our climate is experiencing these volatile shifts from wet to dry year after year, and even month after month, which makes water resources planning and management so challenging in a changing climate.”

The manual snowpack reading was taken at the Phillips Station near Lake Tahoe with a snow depth of 48.5 and a snow water equivalent of 19 inches, which is 109 percent of the average for this location for this date. Currently, the water content in the snow is at 57% of the April 1 average, representing how much water the state will have from runoff in the spring and summer. The graphic shows the current major state reservoir levels.

“That one dry month of January basically wiped out whatever head start we had as we head towards the end of winter,” reported de Guzman, adding, “We still have about two more months to build up our snowpack, but we all need to be prepared for a third consecutive dry year.”

Also today, the State Water Resources Control Board announced that Gov. Gavin Newsom’s call for a voluntary 15% reduction in water use was met for the first time in December. Californians actually exceed that goal, using 16.2% less water compared to the December before. However, the cumulative savings since Newsom’s July request sit at 7.4%, according to water officials. Although not yet in effect, as reported here, the state board recently adopted mandatory water restrictions including a ban on watering lawns within 48 hours of a rainstorm.

The U.S. Drought Monitor reports most of California is considered to be in severe drought with only small sections of the state classified as being in extreme drought, which is actually a significant improvement over a year ago.