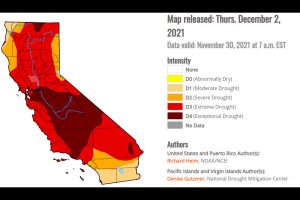 Sacramento, CA – Californians turned on their taps less in October after data from September showed a lack of water conservation even as drought still grips the state.

In September, people reduced their water use by only 3.9%, down from 5.1% in August. Far short of the 15% reduction that Governor Gavin Newsom had requested for 2021, as earlier reported here. It’s unclear what prompted Californians to take action but new data found a collective 13.2% drop in usage compared to last October. Overall, however, total water usage is down just 6% since July compared to the same period last year.

Some of that water use reduction can be attributed to cooler temperatures and an “atmospheric river” that drenched the state at the end of October. Northern California got the biggest boost from the rainy weather resulting in a 22% water use reduction. The U.S. Drought Monitor map of California also shows that the rainy, colder weather also took more counties out of the Exceptional Drought category to Extreme Drought as the map in the image box shows compared to last month’s map to the left. But as the drought lingers and with this being the second driest year on record, calls for voluntary conservation are getting louder as fears of another dry winter are proving true.

With most of the state’s reservoirs well below historic averages, last week the state’s Department of Water Resources advised water districts not to expect the supply they’ve requested from the state for 2022 except “what’s necessary for health and safety.” Additionally, next month, the state water board may prohibit certain “wasteful“ actions such as outdoor watering during storms, which can account for up to 80% of all usage.