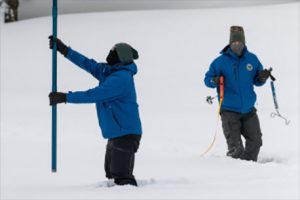 Sonora, CA – California water officials conducted the first snowpack reading for the year and the recent winter storms made it a strong start.

Statewide the snowpack is 160% of the average for this time in December, according to Department of Water Resources (DWR) officials. As California ends its second-driest year on record, it is still too early to determine whether there will be enough rain and snow in the months ahead to put a dent in the drought.

The state is “definitely not out of the woods quite yet,” said Sean de Guzman, manager of the snow surveys and water supply forecasting for the DWR. “California continues to experience evidence of climate change with bigger swings between wet and dry years and even extreme variability within a season. A wet start to the year doesn’t mean this year will end up above average once it’s all said and done.”

The survey was conducted at the Phillips Station in the Lake Tahoe area. Thursday’s measurement was reported at 78.5 inches of snow, containing 20 inches of water. That is 202% of the historical average for that location and 82% of what’s typically there on April 1, when the snowpack hits its peak. De Guzman added that the state needs strong precipitation in the next three months to get to or above the typical April average.

While noting that California could not have asked for a better December, state Department of Water Resources Director Karla Nemeth stated that the strong December numbers do not change the state’s plea for Californians to conserve water. Back in July, Gov. Gavin Newsom called for a voluntarily 15% reduction in water use, but that goal is far from being met. State officials have warned mandatory water restrictions could be coming if conditions do not improve, as reported here.

“Californians need to be aware that even these big storms may not refill our major reservoirs during the next few months. We need more storms and average temperatures this winter and spring, and we can’t be sure it’s coming,” advised Nemeth. “So, it’s important that we continue to do our part to keep conserving – we will need that water this summer.”

State water officials pointed back to 2013 when a wet December was followed by an extremely dry January and February during the last drought. The U.S. Drought Monitor still has most of California in a severe to “extreme drought.” In September, 45% of the state was gripped by “exceptional drought,” the worst condition.

About a third of California’s water supply comes from the mountain range snow as it melts. The chart shows the current reservoir levels. Five snowpack readings are done on the first of each month from January through April and, if necessary, May. The recent storms made for a far more positive snow reading than last December when water levels in the snowpack were at just 52% of the historical average.