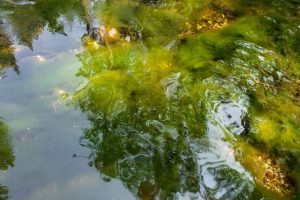 Yosemite, CA – Yosemite National Park is warning visitors to stay out of Tenaya Creek due to toxic algal blooms, the area is east of where a family was found dead in Mariposa County.

The park has received positive results on recent testing for small amounts of toxic algae in Tenaya Creek in Yosemite Valley. And there may be more toxic algae existing in other sites in the valley, according to park officials. The problem, they explained, is that “toxins are concentrated within algal mats themselves and are released episodically into the water when the algae die or are disturbed.”

For that reason, the park is notifying visitors to beware and not enter or drink from the creek, which flows from above Mirror Lake to where it enters the Merced River near North Pines Campground. Also noting that “filtering and/or boiling the water is not effective against this type of algae.”

Park officials advise that pets should not be allowed to drink the water, eat or touch the algae. The latter refers to dogs from eating dried algal mats onshore.

Park officials ask visitors not to disturb algal mats in any way, as wading or swimming can cause toxins to be released into the water. They added “While some sites have signs posted, don’t rely on signage alone.

Even in areas with no visible algae, watch for isolated clumps of algae floating by.” The public can help by reporting any large algal blooms and/or algae that is particularly bright, bubbly, strange-looking, or appears like a haze in the water. Click here to make a report.  Monitoring for toxic algae and testing for toxins continues throughout the park.

Of note, this is east of the area where a Mariposa family was found dead last month near the Sierra National Forest gate leading to Hites Cove in the Jerseydale area, as reported here. A couple of days later water samples were taken in the area, as detailed here. Then on September 3rd, the Burea of Land Management closed a stretch of the Merced River in Mariposa, between Briceburg and Bagby, after toxic algal blooms were found.