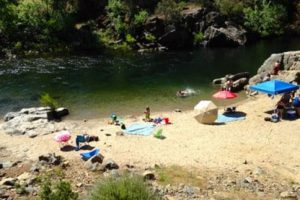 Mariposa, CA –  The Bureau of Land Management (BLM) Mother Lode Field Office is citing “public safety” as the reason for issuing a temporary order to close some public lands in Mariposa County.

“The safety of visitors to our BLM-managed public lands is a top priority,” said BLM Mother Lode Field Manager Elizabeth Meyer-Shields. “These algal blooms can produce toxins that can make people and pets extremely sick. We will continue to monitor for the algae’s presence and look forward to when the public can safely recreate in the Merced River.”

This is west of the Devil’s Gultch area where last month a Mariposa family, including a one-year-old girl and the family dog, was found deceased, as reported here. Two days later, the sheriff’s office reported that foul play was not a factor in their deaths and instead revealed that water samples were taken by the state to check for any signs of toxic algae blooms, as detailed here. This is the same area where the Sierra National Forest issued a toxic algal bloom alert in July, as reported here. The BLM’s order did not mention the family’s death or whether the shutdown was connected to that investigation. Calls to BLM officials regarding the possible connection were not returned as of this posting.