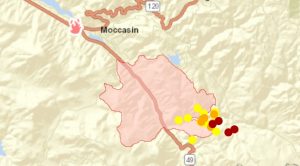 Update at 9:15 p.m.: The Moc Fire’s containment has grown slightly to 12 percent and the acreage remains at 2,800 this evening. Tuolumne County OES notifies the public that there will be a community informational meeting tomorrow morning (Monday, 8/24) at 11 a.m. at the Mother Lode Fairgrounds at 220 Southgate Drive in Sonora in the Manzanita building. They add that masks and COVID-19 screenings are required.

Click here for a timeline of the Moc Fire. An update on fire suppression efforts and weather concerns are below.

Update at 8:55 p.m.:  A Red Flag Warning that is predicted to bring stormy weather producing lightning, winds and low humidity is still a major concern for CAL Fire regarding possible spread of the Moc Fire. Click here for details on the warning.

Today crews were able to keep the acreage at 2,800 and even made some progress with the fire’s containment inching up to 12 percent. The blaze has been burning in the Moccasin area of Tuolumne County on both sides of Highway 49 since Thursday afternoon. What sparked the fire has yet to be determined.

CAL Fire gives this update on suppression efforts: “Crews continue to secure the fire line along the north and southwest sides of the
incident. The fire activity in the Jack Ass Creek drainage continues to be a point of concern for suppression personnel. Suppression efforts in this area of the fire will continue through the evening. The
approaching weather front is projected to affect fire behavior and be a driver for suppression tactics.”

Details regarding the weather concerns, current evacuations and road conditions are below.

Update at 1:30 p.m.:  Air and ground crews have managed to keep the Moc Fire, burning in the Moccasin area on both sides of Highway 49 in Tuolumne County, at 2,800 acres and ten percent contained. CAL Fire released the below mid-day update:

“Crews continue to safely and aggressively pursue suppression efforts in the Jackass Creek Drainage East of Highway 49. Fire behavior during the previous operational period was not allowing any increase to containment, hampering air operations, and posing a significant threat to Priest Coulterville Road. Mitigating the potential of the fire to spread to the evacuated communities remains the priority for fire personnel. CAL FIRE continues to work with the local utility agencies to restore power where it does not pose a threat to fire fighter safety.”

Tuolumne County OES adds this clarification regarding the power outages:  “While PG&E is restoring power in the Groveland area for other utility infrastructure needs, it is not safe to repopulate the area due to the Red Flag Warning and concerns about lightning strikes.”

All evacuations and road closures remain unchanged. Further details on fire suppression efforts are below.

Original post at 9:03 a.m.:  Tuolumne County, CA — Crews were able to boost the containment from five to ten percent on the Moc Fire, overnight while keeping the acreage steady at 2,800 acres.

There remain 1,500 homes and businesses at risk of the flames, but firefighters have managed to keep the fire at bay with none damaged or destroyed. There also remains a threat to critical power and
water distribution infrastructure for the City of San Francisco, PG&E and the Moccasin
Fish Hatchery. Hundreds of residents have been forced from their homes. Yesterday, the Tuolumne County Sheriff’s office did lift all evacuation orders on the Moccasin Hetch Hetchy Plant at noon, as reported here with the road closure details.

The fire that is burning in the Moccasin area of Tuolumne County on both sides of Highway 49 continues to be most active in the Jackass Creek and Cobbs Creek drainage area, heading southeast towards Preist-Coulterville Road, as can be seen in the image box map. It has rugged terrain and is difficult for crews to access. CAL Fire spokesperson Dave Lauchner Currently, the fire is active in the area of Jackass Creek drainage. The increase in fire behavior in this area continues to pose a significant threat to the evacuated communities. For that reason, he told Clarke Broadcasting that he does not foresee any additional releases, stating, “If it does break out of that drainage, it could make a run-up that hill, potentially at Groveland. So, instead of repopulation Groveland and then having something go south on us and then having to evacuate them again, were going to hold the evacuations for now.”

A big area of concern today is the Red Flag warning that this is in effect until Monday at 11 p.m, as detailed here. The National Weather Service expects the dry storms to produce lightning, winds and low humidity, a bad combination that could spark additional fires or cause the Moc Fire to spread.

Resources on the scene today include 697 personnel, 91 engines, 20 water tenders, 21 hand crews, 14 dozers, and 3 helicopters. CAL Fire notes that there are also numerous firefighting air tankers from across the state also battling the fire from above, dropping retardant on the flames.