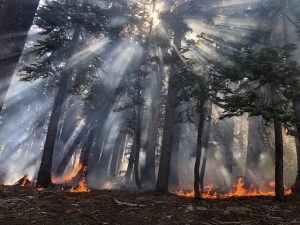 Sonora, CA – The acreage has grown on two lightning strike wildfires burning in forest areas, one is in Yosemite National Park and the other in the Stanislaus National Forest.

The Blue Jay Fire has grown from 65 acres reported earlier this week to 80 acres. There remains no containment. A lightning strike sparked the blaze on July 24th in Yosemite about four miles south of White Wolf Campground and one mile west of Lukens Lake Trail. Park officials relay that it is not burning along trails. They give this description of the fire, “It is creeping and smoldering through ground litter on the forest floor and burning in pockets of accumulated dead and down logs with some isolated single tree torching along the active perimeter.”

The strategy for the weekend is to contain the flames to a specific area utilizing natural barriers, like granite and bare ground. There continues to be no threat to structures. Smoke is visible on Tioga Road, Glacier Point, and from high country viewpoints, as it is above the tree line and moving in an easterly direction.

Four days later, lightning also ignited the Bell Fire in the Stanislaus National Forest, which continues to burn on the Summit Ranger District in the Emigrant Wilderness about 5 miles east of Dodge Ridge Ski Resort. It has inched up from 10.5 acres, as reported here on Monday, to 13 acres today and it also has no containment. Forest Fire officials detail the fire’s movement is very slow, and like the Blue Jay Fire, crews are using similar natural barriers including boulders, creeks, and trails as containment lines. Currently, no forest, road, or trail closures are in effect. However, forest officials say if that changes, signs will be posted requiring firefighter escorts for visitors in those impacted areas from 8 a.m. to 5 p.m.