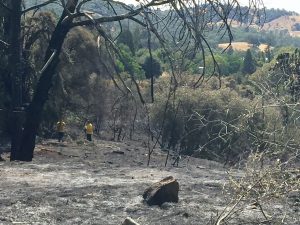 On Monday afternoon, Police Chief Scott Ellis shares, “We are following all leads and making contact with potential witnesses. At this point we have not made any arrests — we are working with both Angels Fire Department and CAL Fire to determine the cause and origin of the fire.”

He adds, “At this point, the cause of the fire is deemed as ‘suspicious’ at least until the cause can be determined.”

As reported here with updates and photos, the blaze broke out behind O’Reilly Auto Parts off Highway49-South Main Street in the 5 p.m. hour Friday. Due to intense smoke and the condensed nature of the businesses and residences in the area, multiple fire calls were made to 911 that, once checked out, turned out to be all part of the same incident.

Multiple responders, including Columbia aircraft, came to assist in getting control of the wildfire, dubbed the O’Reilly Fire as it rapidly continued to burn through dry grass through a canyon area towards Utica Park, immediately threatening structures on South Main Street, Utica Lane and in the areas of Bush and Echo streets.

Arriving aircraft identified the major structure threat areas and dropped fire retardant to protect homes and assist with further spread while a unified fire command structure was put in place between the City of Angels Camp and CAL Fire. Police and the Calaveras County Sheriff’s Office closed the highway in the affected area. The next day, as reported here with additional photos, officials were indicating the fire could have been arson.

“The fire was pushing up embers and dropping in some areas,” recounts Angels Camp and Altaville-Melones Fire Chief John Rohrabaugh, adding that some structures were briefly on fire, including the attic of one home and the roof of the movie theater.

“It is such a benefit to have the CAL Fire aircraft so close in Columbia, those [fire retardant] drops on Bush Street and Echo saved the day — we could have lost three to five more homes and it could have been so much worse. We had three committed ground units with others en route and had multiple calls for people trapped, and spot fires.”

Within two hours, the fire was under control. Reported damage included one unoccupied home and an outbuilding destroyed across from the park along with minor damage to two homes and a garage. Multiple fences and yards and landscaping also bore impacts due to fire spotting. There were, fortunately, no injuries, and no one was displaced by the fire.

Chief Rohrabaaugh adds that fire units remained on scene through the night and all day Saturday, Sunday, and on Monday, personnel was just starting to pick up the hoses.

Over the weekend, Clarke Broadcasting took photos of the impacted areas marked by blackened ground, some ruins, including charred wood structures supporting the antique mining equipment at the edge of Utica Park.

A good deal of pink fire-retardant remnants was still spattered on rooftops, including atop historic Utica Mansion, and across the landscape adjacent to the park. It was dramatic to physically see evidence of the fire’s footprint where it was arrested just short of the Utica Park buildings and playground. To view photos, click into the image box.