Arson Being Investigated In O’Reilly Fire In Angels Camp 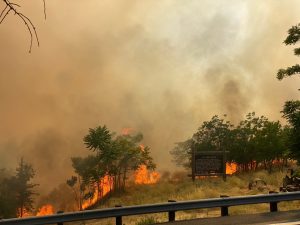 Chief Scott Ellis tells Clarke Broadcasting, “We are currently conducting an ongoing investigation into leads related to this possibly being an arson.” However, he would not release any further information regarding a possible suspect, as it is an ongoing case. The fire is contained at ten acres and three engines remain on the scene this morning.

It was a very close call for the community as the fire was in the vicinity of the historic downtown area. The blaze broke out just after 5 p.m. behind the O’Reilly Auto Parts store, between the highway and Mark Twain Road, as reported here. Then the flames took off heading towards Utica Park, threatening businesses and homes in the area. The highway was shut down between the store and Utica Park and residents in that area were evacuated from their homes.

It took CAL Fire ground and air resources about two hours to stop the flames forward rate of spread. The evacuations were lifted and the highway was reopened around 7:45 p.m. A small crew is expected to remain on the scene today, checking for hot spots and conducting further “heavy” mop up.